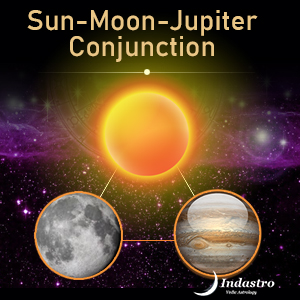 In this conjunction, all three planets are friendly to each other which is a plus point. Moreover, there is Jupiter, which is the most benefic among the nine imperial stars. Moon however is a little weak and feminine. Nevertheless, natives having such a conjunction in horoscope are usually sharp-minded and generous people. Luck always seems to be on their side because of the benefic presence of Jupiter. These natives are headstrong powerful people who are highly skilled and born to lead. They tend to follow a pious path in life.

Those born under the trio of Sun, Moon and Jupiter have a philosophical bent of mind. They tend to be highly knowledgeable and sociable in nature. Such people believe in hard work and put their best foot forward. This conjunction also gives spiritual inclination and interest in religion. Native may have a tendency to practice Yoga and visit foreign places. This a positive conjunction for businessman and people in authority. Negative traits of such an individual include arrogance, aggression and insincerity.