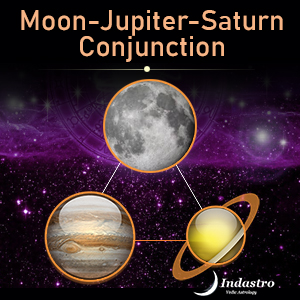 Saturn and Jupiter are both associated with spirituality and liberation and when such a conjunction falls in a horoscope together with Moon, the native is likely to have a strong penchant for ancient scriptures.  Such a person tends to be religious, inclined towards occult sciences, has a philosophical bent of mind, positive approach and respects elders.

They strongly believe in the concept of God. Native also enjoys respectable position and favors from the government. Their earnings are substantial and they tend to opt a career involving leadership. Their tend  to live a healthy lifestyle and also like children. They tend to get involved with opposite sex and, especially older in age. This conjunction of Saturn, Jupiter and Moon is very positive in most of the houses, except 2nd, 8th, 9th and 11th.