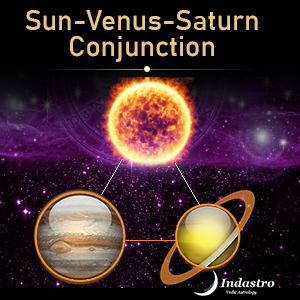 Here, Venus which is a feminine benefic planet is under the affliction two malefic planets. This three planets conjunction is thus considered unfavorable for a native in Vedic astrology. Such people do not bear an upright character. Due to their attitude and actions, they may have to endure public defame too. They tend to be cunning, arrogant and a little harsh in nature. Natives having Sun, Venus and Saturn together in a house are often subject to pain-inducing illnesses.

They lack skills, grace, politeness, and morality. They are not really good with money management either. They tend to spend extravagantly, often beyond what their wallet allows. Their marital life is often turbulent due to these reasons, and also because the native has a tendency to be disloyal. Some health issues may also persist such as skin problems and cardiac issues.