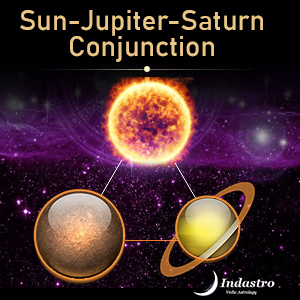 The conjunction of Sun, Jupiter and Saturn is considered inauspicious in Vedic Astrology, especially if under malefic influence due to other planets/houses/signs. Jupiter is afflicted here. While the native is intellectual and smart, he spends his energies on wastefulness and illicit relations. Such a person is favored by people of eminent rank. These natives tend to be fearless and enjoy a good marriage, progeny and social circle. Those in business also get profits.

However, people having this planetary conjunction do not bear a moral character thus tend to grow a lot of enemies and opposition to tackle throughout life. Moreover, the conjunction also causes health issues such as skin sores and nerve damage (leprosy).