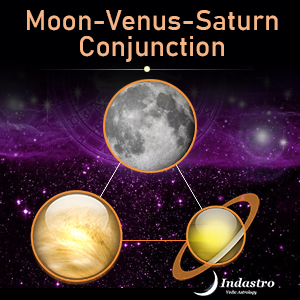 The combined influence of Moon and Venus makes the person generous and polite. Such people are compassionate and helping in nature. They believe in charity and donations too. Moreover, Saturn’s energy ensures that they spare no effort in whatever task they are assigned to do. Due to higher-than-average intuition and creativity, they have all the qualities to excel in fields such as astrology, teaching, editing and even business.

Those under the influence of the conjunction of Moon, Venus and Saturn tend to be intellectual and versed in religious subjects. These natives usually belong to noble families and favored by eminent and scholarly individuals. They tend to enjoy the companionship of many women in life. However, their marital life is often unsuccessful of faces hurdles.