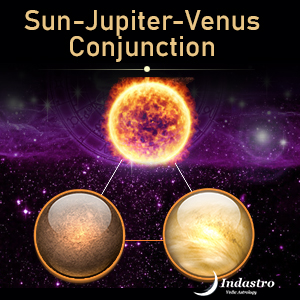 While Sun and Jupiter are two friendly planets, but they are inimical towards Venus, thus they affect the wealth-giving properties of the benefic planet. People having this conjunction in their horoscope have a lot of knowledge about material goods like posh cars and branded things. They also tend to earn a lot of money but due to weak Venus, they lose their wealth on illicit relations, gambling and other vices. Such people usually serve others than be their own boss.

If Sun, Jupiter and Venus are together in a house, the coming together also makes the native work hard in life. Such people reap the rewards of their efforts and enjoy a respectful position in society. They tend to be good with organization and management too. However, this conjunction makes the native suffer from eye related issues. The period after marriage is often more favorable for such natives.