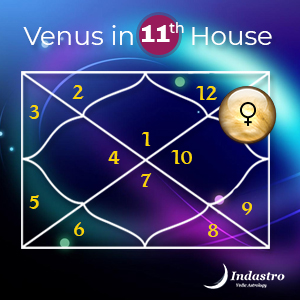 This is a good position since the 11th house is the house of gains. Venus, being a princess, will be happy to fulfil your hopes and wishes. Venus (planet of compassion and passion) will provide you with all possibilities to open up and explore the world. You will be able to direct your thoughts and use it to make money at all levels. Creativity will flow naturally in all aspects of your life.

It will give you a very soothing and jovial personality. You will attract many friends who would want to work and connect with you for business growth. This will bring many opportunities.

You will meet your spouse in a social gathering, family function or business concert. You will gain financially because of your spouse - who will bring a lot of wealth and abundance in your life, might bring huge money in dowry, might be earning a huge amount of money, or will elevate your financial status as compared to the present.

When Venus is in the 11th house, you will be more inclined towards business opportunities rather than a 9-to-5 job where you will feel your creativity being suppressed and will not be able to explore and manifest your ideas and thoughts. A business oriented towards women’s products and financial institutions like cosmetics, home furnishings, accessories, clothing and apparels can bring you lot of gains and profits. So can stock market trading and bonds, art and music related business.

This position will make you have more friends from the opposite sex.

A positive Venus in the 11th house will give you an attractive personality. You will connect easily with everyone. It will enhance your ability and thinking patterns towards enhancing your business and growth. You will have the knack to deal with people and give them what they want with an immediate, influential quality. You will attract abundance, wealth and happiness.

A negative Venus in the 11th house will give you an immense craving for materialistic gains and will make you hoard things, whatever they may be. You will be possessive about your belongings and not like to share them with others. You might associate with negative influences and be misguided. You will create a toxic environment in your relationship and will end up with disharmony and mental stress.

Some notable sign placements for Venus in 11th house

Retrogression of Venus in the 11th house will make you work hard to achieve your goals and financial earnings. In matters of business opportunities, the deal might get rejected at the last moment and will not act in your favour. You will have to start the work again from scratch. Your life will be like a roller coaster ride and totally unpredictable.

Combustion of Venus in 11th house will make you keep bad company; you might get involved in wrong deeds and scar your reputation. You will involve in speculations and other illegal activities, which will cause you trouble. Your creativity and hard work will not be recognised by others. This will cause you irritation, suffocation and anger.