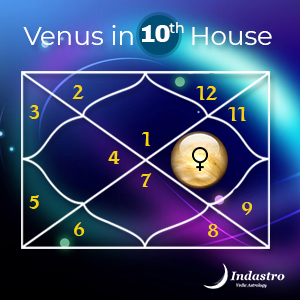 Venus in 10th house represents authority, position, passion, compassion, and public image. It represents the way you project it to the world since it’s the house of your career and reputation. It depicts your capabilities and skills to gain authority, name and fame.

This position usually makes you utilise your creativity to become more responsible for others. You would want to do the right thing to help others through your authority and status. Hence, you can probably become a social worker or philanthropist. Further, as Venus stands for love and compassion, you can spread unconditional love and serve others well.

You will be in a career which is connected with creativity. You can be a singer, film actor, artist, designer, a clothing and fashion apparels professional, etc.

Venus represents love in a relationship. You will find your spouse in a workplace or professional area. Your spouse will be career-oriented and professional. This position of Venus will manifest a very professional attitude towards marriage. You will marry to project a certain image to the world. You will marry a person to achieve a desired reputation and can utilise this status and authority to help the unprivileged.

A positive Venus in the 10th house will make you love others unconditionally, whether you get the same emotion from others or not. You will want to live a high-profile life and connect with influential people. You would work hard to achieve your desired goals, to open up doors to elevate Self and help others with love and compassion. You will have a blissful relationship with your love.

A negative Venus in the 10th house can make you self-centred and greedy. You will do anything to maintain your status and become overloaded with debts. You will crave for limelight, attention, name and fame, and you can undertake any action and deed for publicity. Internally you are trapped in the loop of money just to maintain your fake status. You will not have harmonious relationship with your companion.

Some notable sign placements for Venus in 10th house

Retrogression of Venus in the 10th house will make you quite materialistic and push you to work hard for it. It gives you creative abilities; you can make the best out of it whenever the opportunity shows up, but, if you miss the opportunity, then it’s gone. Be more cautious about your name and fame, which can get affected because of your immediate reaction to a situation.

Combustion of Venus in 10th house is not a good position. Your ability and creativity will be blemished by others. Despite being intelligent, a hard worker and outstanding performance in your profession, you will not be rewarded. In fact, your work will benefit others. Your thought and the amount of creativity you put in your work will not be appreciated and will not provide you with gains.

This will make you jealous and envious about others.

Malavya Yoga: If Venus is placed in its own house in kendra, then Malavya Yoga forms, which brings marital happiness, happiness from children and prosperity.