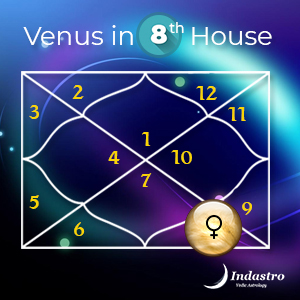 Venus in 8th house will bring suddenness in your life. It shows a union or marriage and, this house specifically, shows how your in-laws will be, their traits and nature. This position will make you a secretive lover. You might meet the person at a social gathering and maintain a warm relationship but will be hesitant to reveal it in front of society. You will maintain the affair in secret.

As 8th house is the house of secrecy, hidden thoughts and beliefs, you will hold your secrets and this will also drive your assets and convenience. You will neither like nor be comfortable to reveal too much to the world.

Your spouse will be committed to you but will not forgive you for any mistake. However, he or she will take extra care of your likes and dislikes; at the same time, will control all your assets and will take an interest in your finances. Your spouse would maintain a balance between saving and expense; and would wish to know about each expense on your part. Your joint assets will flourish after marriage.

If you go against social norms and have multiple affairs, then you actually destroy the glitter and power of Venus. As Venus is pure love and romance, if you exploit this energy by extra marital and other illegal relationships, then it will create repercussions in your life. Your speech will become blunt and rude, which will not be liked by people.

An 8th house Venus gives you the peculiar trait of blaming your spouse or life partner for the very same things that the 8th house person himself / herself does. It is, maybe, due to the deep psychological insight into one’s own behaviour that triggers such, usually untrue, allegations.

A positive Venus in the 8th house will make you maintain secrecy to the core, be it personal or professional. You will be committed to your spouse and your life will be filled with romance and immense love. Your family will support in financial growth and progress. Your speech will be attractive and soothing; this will help in influencing others, especially in the professional front.

Some notable sign placements for Venus in 8th house

Retrogression of Venus in the 8th house will make you spend on whim and get into extra marital affairs. When it comes to relationship, there will be breakups, especially in airy and fiery signs, where it will create disharmony in the relationship.

Combustion of Venus in 8th house will not allow you to be attracted to the opposite sex. It will create humiliating situations and a sense of unworthiness towards oneself. You will not be able to attract wealth and prosperity; and will be cheated in business. You will get involved in wrong deeds and break social norms.