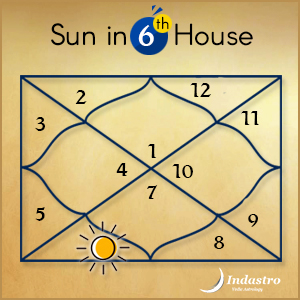 Results of Sun in sixth house

A positive Sun in 6th house helps the native fight off the diseases and build resistance against illnesses. Such natives have good immunity and stamina. While Sun’s vitality and energy is not as forceful here as in other houses concerning health, it builds a tendency to be cautious in health matters, which ultimately proves helpful. This position of Sun also indicates promotion to a higher and responsible position for the native after continuous everyday efforts. Such people also have a deep respect for authority and are disciplined in nature.

Natives having Sun in 6th house are also determined and dedicated to their work. Sixth house placement of Sun gives the native a strong sense of service. Such people either have a yearning to be of service to others or become self-invested & strongly need to be served. Work is the area where they want to stand out from the rest. And if they are on the other side of the table in employee/employer relationship, they can be very demanding and bossy.