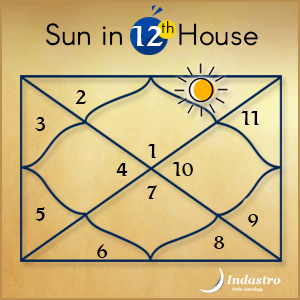 Results of Sun in Twelfth house

The position of Sun in 12th house indicates that the native may have to suffer an obscure and dark time for some part of life. Nevertheless, if the aspects, conjunction and other factors are favourable, the native will have the ability to sidestep troubles, tackle challenges and rise up despite the odds. Otherwise, the native may lurch in the sea of trouble. Such people may have strong inclination towards occult sciences, intuition, and psychic phenomena. You would find that most people having Sun in 12th house exhibit eccentric tastes and tendencies.

They are pulled between two conflicting desires, to retreat from the world and to be served and sympathized with. Their present life is marked by endless thoughts and attempts to remodel the character they have picked from previous lives. Such people usually empathize with people suffering from mental disorders. But they may have to struggle in progeny matters and finance. Relationship with father could also be inimical as given in ancient scriptures.