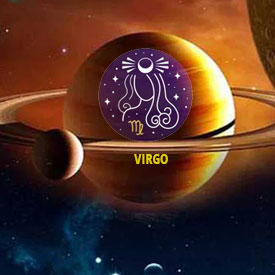 The results of Shani Sade Sati for Virgo usually remain average for Virgo natives. Virgo is ruled by Mercury, which Saturn considers as a friend. Here, airy Saturn is in a friendly earthy sign so mostly, life would be stable but expect a few shaky moments too.

Sade Sati for Virgo natives begins when transit Saturn moves into Leo, just preceding the natal Moon. This is certainly not the most opportune time to implement new business ideas.

You should also be careful of your friends. Students also need to be alert. Life needs more concentration and caution during this time.

Here is the detail of Virgo Shani Sade Sati's effects explained in all three phases.

Since Saturn moves into Leo's sign during the first phase, results are somewhat negative as Sun, the lord of Leo is an enemy planet. You might run into business-related issues and losses during this first phase of Sadi Sati for Virgo.

This could also create a halt in your career progress, maybe a gap in your job. Health should certainly be paid attention to if you seek to avoid hospitalization. You may also encounter issues paying off outstanding debt during this time. Enemies also try to drag you down.

When Saturn moves into Virgo, conjunct natal Moon, it gives relatively positive results as Mercury, the lord of Virgo is friends with Saturn. You would develop humanitarian tendencies and may like to take part in social work too.

You would also like to offer advice to others but may indulge in disputes at times. You would however win in debates. While you would be very logical during this time, you may depend upon others too much.

You should avoid taking a loan during the second phase of Sade Sati. This dasha is positive for business progress. Colleagues would also support you most of the time.  You may get a new job during this time or get a promotion. Health-wise, you would get relief from a chronic issue.

As Saturn transits to the 2nd house from the natal Moon, meaning Libra, the third phase of Shani Sade Sati for Virgo natives begins. Saturn is exalted in Libra, so the results would somewhat be positive as compared to the previous phases.

Native would spend a lot on females in your life and luxury items. You would become a lot more righteous and honest too. You would handle other people quite tactfully.

Some manipulative thoughts might cross your mind in between. You would try to impress other people during this time. You might also want to work as a social worker.