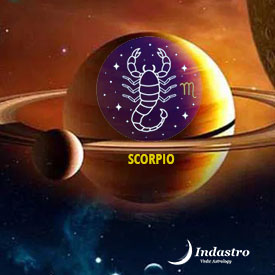 The results of Shani Sade Sati for the Scorpio Moon sign is not quite favorable. This is because Saturn here is placed in an enemy sign, as it is inimical towards Moon. The 7 ½ years phase is good in terms of research work.

Sade Sati particularly affects Scorpios’ peace of mind. Scorpio is an enemy sign and Moon is also debilitated in Scorpio. You would feel a lot more dissatisfied and under pressure.

This might affect your family relationships, finance, and business too. You should practice meditation during this time and avoid emotional involvement.

This is the time to be practical and self-reliant. Too much emotional dependency upon others would only hurt your feelings during the Sade Sati period.

Below is a detailed overview of the three phases of Scorpio Shani Sade Sati effects.

When transit Saturn moves into the 12th house from Scorpio, meaning when it is in Libra, the first phase of Sade Sati begins for Scorpio natives. This is mostly a positive period.

While there would be some mental distress at times, things would mostly remain on track. You would get some sort of assistance from foreign sources.

Respite in litigation matters is observed too. You might land a new job during this time. You would also experience relief in health matters. You would get rid of chronic disease now.

The second phase of Sade Sati for Scorpio begins when Saturn moves into Scorpio itself. It is not a favorable period as Saturn is in Moon’s sign, which indeed is a sworn enemy of Saturn.

You might develop a tendency to be secretive. You would become short-tempered, harsh, and somewhat mysterious. A sense of dissatisfaction might contaminate your life.

You may also become vulnerable to accidents and danger from poison. Some sudden incidents might take place during this time too. This is not the best time to expand your business or indulge in risky investments. You should also be cautious of your colleagues.

The third phase is Shani Sade Sati is relatively better for Scorpio natives as Saturn has now moved into Sagittarius. Jupiter, the lord of Sagittarius shares a neutral liking with Saturn.

While there would be some mental tensions during this time, life would be somewhat steadier. You would become a justice-loving soul.

Some foreign travels are also possible in the third phase. You may have to go far from your native place.