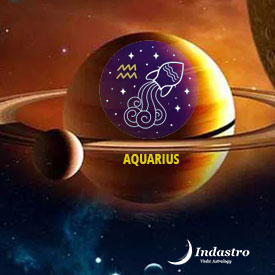 Aquarius is an air sign ruled by Saturn itself so results of Sade Sati for Aquarius natives would be tolerable. Saturn now wants you to keep a tab on your money. You should focus on your sources of income.

You might like being part of and form groups but too much community involvement could get in the way of progress too. You would become emotionally vulnerable. You would pour your heart out to anyone and everyone who comes across as trustworthy.

All you need during these years is a shoulder to cry on but Saturn wants you to get a grip on yourself. During this Shani Sade Sati period, Aquarius needs to be practical and independent and resonate with your sign’s characteristics. You need to restrict your emotions and bring life back on track.

Here is what to expect during different phases of Sade Sati for Aquarius Moon Sign.

The first phase of Shani Sade Sati for Aquarius begins when transit Saturn moves into the 12th house from natal Moon, meaning Capricorn. Since Capricorn is also ruled by Saturn, the first phase is usually good.

It could be challenging sometimes but if you work hard enough, success would eventually kiss your feet. Minor health issues might persist during this period. You also need to keep your desires in control.

You would become a lot more loyal and responsible though and you would also become emotional, justice-loving, and fair. You might in fact indulge in social work too.

You would work towards attaining a better life and would be willing to learn new things and gain new experiences. You may also gain profit from land during the first phase.

When transit Saturn moves into your own Moon sign, the second phase of Sade Sati begins Aquarius. Saturn is reclusion and Moon is emotions & thoughts, so naturally, having Moon and Saturn together in a house makes the native a lot more deep-rooted and curious.

This is a bit confusing but a positive phase. Saturn is in its own sign here. Your efforts and hard work pay off well during this phase. You could get fame in politics and public administration.

You might get a job in the government sector too. You would like to do social work during this time. Your business would also run smoothly. However, too much work could give you some mental stress too.

Aquarius Shani Sade Sati effects are going to be neutral during this third phase as Saturn now is into Pisces, which is ruled by Jupiter, which shares an average relationship with Saturn. Your focus would drift to spirituality now.