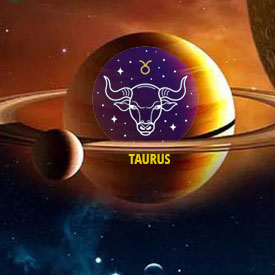 Taurus is ruled by Venus, and both Saturn and Venus share a friendly bond but this doesn’t mean that the results of Sade Sati for Taurus are completely positive.

Saturn is air, while Taurus is earthily ruled by watery Venus. Airy Saturn is likely to bring some waves in the current of life leaving you on shaky ground at times.

Nonetheless, the effects of Sade Sati for Taurus would be tolerable as Saturn is friendly towards Venus. It is Moon’s involvement that makes Sade Sati particularly fearsome for many.

Saturn in fact is the Yogakaraka planet for Taurus, as it is the lord of the 10th and 11th house from Moon.

Below is the detailed impact of Sade Sati on Taurus during different phases.

Despite Saturn being the Yogakaraka planet for Taurus, Sade Sati doesn’t yield positive results for the native in the first phase. The first phase begins when Saturn enters the 12th house from your natal Moon into Aries, which is apparently ruled by Mars, a fanatical enemy of Saturn.

During this phase, the native would have to work hard to achieve his or her ambitions. Expenditure also shoots up during this time, especially due to useless travels.

Native would feel more interested in the opposite sex. Some eye-related issues and sleeplessness persist too. Chances of incurring debt and financial ups and downs would be there as well. Sade Sati also makes the natives aggressive in the first phase.

The second phase of Shani Sade Sati for Taurus begins when it enters into your own sign, conjunct natal Moon. Due to the positive relationship between Saturn and Venus, this period is relatively soothing.

Native develops a penchant for luxury things and lifestyle. This is a positive period for people in business and politics.

While minor health issues persist during this time, overall, this is an easygoing phase. Native would want to earn more knowledge at this point.

Some pressure could be felt in the career domain, which will be creating minor stress and tensions. However, it is much better than the previous phase.

The effect of Sadi Sati for Taurus in the third phase is also positive, native as Saturn shares a friendly relationship with Mercury.

In this phase, Sade Sati for Taurus begins when it moves into Gemini, which is ruled by Mercury.

Mercury is the planet of communication and intellect so Saturn helps win in debates and make decisions wisely during this time. However, at the same time, some lack of peace of mind and mental distress persists during this phase as well. You may also run into financial debacles of a minor sort.