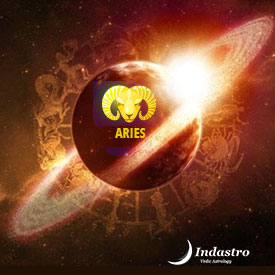 Aries is ruled by Mars. Below we are going to discuss the effects of Shani Sade Sati on Aries.

In Vedic astrology terms, you can say that Mars and Saturn are enemies. Saturn in fact is debilitated in Mars. Moreover, Saturn’s air only fans the fire of Mars so this combination doesn’t work well.

Shani Sade Sati for Aries is usually a demanding period in life. Here is what you can expect from different phases.

When Saturn moves into the 12th house from your Moon sign, it would occupy the sign of Pisces, marking the beginning of the first phase. This phase of Sade Sati for Aries turns out to be average as Jupiter, the lord of Pisces is neutral towards Saturn.

Native may have to travel a lot during this phase, which can lead to physical distress at times. You may also suffer on account of health sometimes during this 2 ½ years phase.

When Saturn transits to Aries marking the beginning of the second phase, it causes a lot of mental stress and anxiety. Native is quick to anger during this Shani Sade Sati period.

Loss of confidence and depression become the strongest enemies during this phase. Native also has to struggle in keeping their marital harmony intact.

Some issues with a daily source of income are also felt at the same time. Feelings like jealousy creep into one’s mind and emotions too.

Business partnerships also remain unfavorable during the second phase of Sade Sati for Aries. Since Saturn is now conjunct with the natal Moon, this phase also leads to health issues and domestic problems. Native may also have to suffer humiliation at some point.

In the third phase of Shani Sade Sati for Aries, Saturn would move into Taurus, which is ruled by Venus that shares a friendly relationship with Saturn. Venusian energy works as a calming influence here.

This makes the native very hard working. No doubt, some mental tension would persist during this phase as well but it is relatively much better than the first two phases.

Some misunderstandings may also persist during this time with your close family members. While you may need to curtail your expenditure during this phase, there could also be sudden gains bringing some respite.