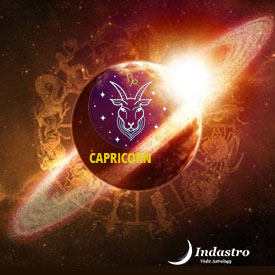 Saturn during the Sade Sati period would make you feel a lot more emotional and vulnerable. You would just get carried away. While it is good to help others but too much involvement and assistance might not bring the desired results.

People might start taking you for granted. You might get so engrossed in it all, that you would end up ignoring your family and personal life, which is not a good thing.

Your desires would also increase during Sade Sati Capricorn and failure to fulfill them might cause dissatisfaction with life itself.  Saturn wants you to keep your expectations realistic.

The first phase of Shani Sade Sati kicks off for the Capricorn Moon sign when transit Saturn moves into the 12th house from Moon, meaning into Sagittarius. Jupiter, the lord of Sagittarius shares a neutral relationship with Saturn.

This phase brings mixed results. Saturn here makes you a justice-seeking soul, inclined towards participation in social work. Native works relentlessly during this time. You want to attain name and fame in life.

You might switch your job during this phase. It is a positive period as it gives victory over opponents. You do however feel tensed and alone at times. You might take up spiritual travel with your parents during the first phase.

When transit Saturn moves into your own Moon sign, the second phase of Shani Sade Sati for Capricorn begins. Since Saturn is the ruler of Capricorn, it feels at home here.

You might purchase land or property during this period. A career becomes a lot more important to you now. However, Saturn makes sure that you work hard enough. Some struggles also persist like you have to stay away from your family during this time.

You however do very well in fields like politics. You would want to do something for the needy during the second phase and may even indulge in social work.

You would become polite and compassionate but at the same time, would remain focused and ambitious too. Mother’s health could be a cause of concern during this phase.

The third phase of Sade Sati begins with transit Saturn’s sojourn into Aquarius, which is the 2nd house from your Moon. You might get property from your father during the third phase. Some sudden gains are also possible.

Your inclination towards occult sciences would increase during this phase of life. You may also get recognition and reward and do well in research. You may in fact start a new business too.

Family life also remains blissful during the third phase and health remains on track too.