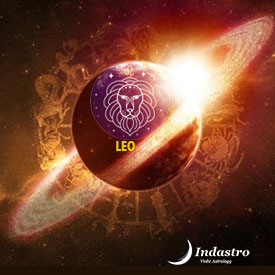 Leo is a fire sign ruled by Sun while Saturn is an air sign. Fire needs air to burn but this combination can also be explosive, especially during the Shani Sade Sati period.

Sun and Saturn are arch enemies of each other. Sade Sati for Leo natives is a period to be careful of enemies and backstabbers. You need to be as alert as your mascot Lion, Leos.

You would come to know of issues when the deed would be done. This is certainly not the time to trust people in money matters. You should also be watchful of your language.

There would be a lot of mental distress during this time and your relationships may also get affected due to all this.

The first phase of Sade Sati for Leo begins when Saturn moves into Cancer sign, 12th from natal Moon. This is going to be a tough period for the native due to unnecessary expenditure and losses. You may also run into debt during this time. Some wasteful travel could also occur.

Saturn may also affect your eyes somehow. Enemies become stronger during this phase. You may face some issues at the workplace and you might indulge in conflicts with your colleagues.

The results of Sade Sati for Leo in the second phase are also not much favorable as Saturn moves into Leo, which is ruled by an enemy planet. Native would now experience problems in married and love life.

Your relationship with children also goes through a rough patch. Your concentration level falls considerably during this time. You may also face stomach and heart-related issues. You might become a lot more stubborn during this time and you may develop a tendency to dominate.

On a positive note, you would feel more inclined towards writing and reading. You would like to explore spirituality too. You might get some gains during this time but after a lot of waiting.

The third phase of Sade Sati would be a lot more relaxing as compared to the previous one. Saturn now moves into the second house from Moon, into a friendly sign.

This gives you a philosophical bent of mind. You are likely to win in debate as your communication skills support you.  There could be some conflicts in the family though.

You would however like to bring justice whenever possible. Expenditure needs to be curtailed nonetheless.