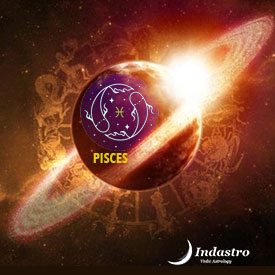 Pisces is ruled by Jupiter, which is neutral towards Saturn. Both these planets are associated with justice and spirituality so naturally, thus as a result of Shani Sade Sati for Pisces, the native would be a lot more righteous and spiritual.

He would like to explore the depths of everything, whether it is study, research, science, or spirituality. He might feel quite detached and aloof from the world towards the end of Sade Sati period.

Too much aloofness from the physical world is not suggested. Saturn wants you to face reality but at the same time, you should not think too much about anything. It could result in sleeplessness and problems in married life.

You need to maintain a calm composure and face challenges head-on to keep things smooth in life. Saturn is just testing your patience.


Results of Sade Sati in the first phase

You would feel more attached to and would be interested in spirituality and religion and may even visit religious places and go for pilgrimages. You need to however curtail your expenditure during this time.

You may also change your job frequently during this phase. You may have to travel a lot for business reasons too. Health also requires your attention moreover. Some issues could crop up in your relationships. Sleeplessness would be a common occurrence during this phase.


Results of Sade Sati in the second phase

This second phase of Sade Sati for Pisces begins when transit Saturn occupies your own Moon sign. Saturn here is in the neutral sign Pisces, which is ruled by Jupiter. You would develop an interest in learning philosophy and deep subjects now.

You would also become more justice-loving and righteous during this time. Your language & manner would be polite and you would like to indulge in social work too.

You would become quite skillful when it comes to making policies and taking decisions. Wealth would also roll in following your confident persona and approach. Married life however may undergo a rough patch during this phase.


Results of Sade Sati in the third phase

This phase is somewhat negative as compared to the previous one, as Saturn would now move into Aries, which is ruled by an enemy planet of Saturn.

Some tensions would persist in life. You may lose your job during this phase or be a victim of a false allegation. Your mother’s health could also go downhill in the third phase of Shani Sade Sati Pisces.

Some unexpected occurrences would disturb the flow of life. Your health could also suffer a setback. Moreover, losses in property matters are also possible. You would be quite aggressive and irresolute, which is likely to affect your marital happiness too.