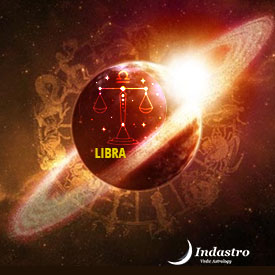 Libra, Sade Sati seldom affects you in negative terms. Libra is ruled by Venus, which shares a friendly relationship with Saturn. Moreover, Libra is an air sign, so its element collides well with Saturn too.

However, you might feel extra sensitive during this time. You would easily get emotionally attached to people and trust others. Your expectations would also increase during the Sade Sati period and if others fail to meet your expectations, you will feel dissatisfied and dejected.

You would become quite vulnerable in relationships. Libra, you would also feel like indulging in social work. The sense of righteousness would be high in you during this time. You would like to help and uplift those in need.

The first phase of Sade Sati for Libra begins when Saturn moves into the 12th house from the natal Moon, meaning into Virgo sign. Since Mercury, the lord of Virgo is friendly towards Saturn, this phase brings mixed results.

You would become a justice-seeking fair person in your dealings. You would also become diplomatic and use tact in handling others. This is a good time for a career as you might get a promotion too.

Your inclination towards spirituality would also get a boost. Some spiritual travels could also take place. You would be willing to give and take help during this time

When transit Saturn moves into your own Moon sign, the second phase of Shani Sade Sati for Libra begins. During this phase, Saturn makes you humble and modest. You would get a lot of help from your social circle and may even get some fame in politics.

Your family life remains cordial and marriage stays on track too. Singles, you may get involved in love affairs during this period.

You would work harder in the second phase, so expect some exertion and mental pressure as well.

Health and career would also see a lot of improvement. If you were in trouble due to some legal issues, expect some relief during this phase.

During this phase of Sade Sati, Saturn would be placed in Scorpio, which is an enemy sign as it is ruled by Moon. This isn’t a very positive stage in life.

You might encounter difficulties in your domestic life. Caution is advised in property matters too. You should think twice before purchasing land or property.

Saturn is likely to pose many hurdles during this dasha for you. It might mess up with your mind and create mental tensions and stress. You should try to remain cool and collected during this time and practice meditation and other calming activities.