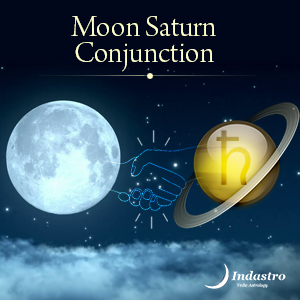 This is quite a mismatch. Both the planets are inimical towards each other. While Moon is a feminine, watery, benefic planet, Saturn is a neutral, airy, malefic planet. Moon transits through the zodiac at the speed of light while Saturn is the slowest moving body. But this conjunction is not always unfavorable. Moon with Saturn in a house shows that the native is an honest, justice-loving and hard working person.

If you too have such a placement, you are likely to be a sedulous being who will realize ambitions and tread towards success through own efforts. Owing to righteousness, such a person will always stand against injustice. However, natives of this conjunction may become pessimistic and melancholic at times, which could affect peace and contentment. Such people should try to be optimistic at all times. The conjunction drives the native towards intoxication such as alcohol, smoking etc. Moreover, the person struggles in marriage, progeny, as well as relationship with mother. Aspect of Jupiter in this case pacifies the shortcomings.