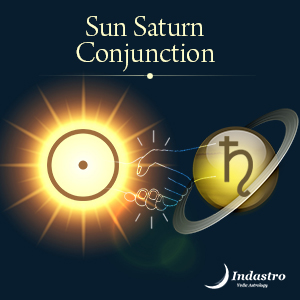 The coming together of Sun and Saturn in a house is considered an average conjunction as it brings mixed results. Such natives usually have a knack for chemistry and Metallurgy. The native may be spiritually inclined and righteous, among those who always tread on the pious path. Nevertheless, this conjunction can be detrimental to one’s marital life and domestic happiness. And this is because the energy of both the planets is entirely different. Sun is a life-giving force, a masculine planet that represents vitality, Saturn on the other hand is a eunuch planet associated with miseries and delay.

This combination brings success, despite the delay. It helps the person evolve, as such a person is usually a self-made individual. These natives turn out to be mature individuals, understand their responsibilities. They often share an inimical relationship with father and have many enemies in life but they tend to be popular among the downtrodden. In Kendra, it causes a bitter domestic life and delay and problems in marital life.