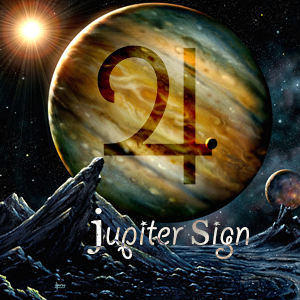 Jupiter is the largest celestial body; its mass is 2.5 times of the total of all other planets in the solar system. Apparently, it is also called the planet of “expansion” in astrology. It expands everything that it comes in contact with, with main focus on wealth and wisdom, which is a good thing. You would rarely want it to be placed in your Ascendant though, unless you are a fire sign who can sweat it out in the gym or don’t mind “expanding” a few inches around the waist. Jupiter is essentially a planet associated with higher learning and fortune. It is indeed the most benevolent planet. Good things come to those who have a strong Jupiter in the chart.  Jupiter also represents justice, morality, and spirituality.

Jupiter takes around 12 years to complete the zodiac circle and spends almost 1 year in one sign. The sign where it is placed in at the time of birth is called your Jupiter sign. Its position in a sign tells how you practice your generosity. Someone with Jupiter in Leo would most certainly be big-hearted and express generosity through charity while someone with Jupiter in Aquarius would express kindness through humanitarian and social work.

Jupiter Sign also reveals your approach towards higher learning and concepts like spirituality. While Jupiter in Pisces can have uncanny ability to submerge themselves in other worldly concepts and tread towards spiritual liberation, Jupiter in Virgo might want logic before following a belief. Jupiter in Scorpio on a completely different note can pick the dark side of occultism too, such as hypnotism and magic. Someone who goes to the other end of the Earth to find answers of their spiritual concepts might have Jupiter in Sagittarius. Philosophers and spiritual Gurus usually have strong Jupiter in their chart.

Jupiter also governs how you bring justice to the world around you. While Jupiter in Aquarius would be more inclined to work together towards an equal & just society, Jupiter in Aries would work more like a fair leader to the masses. How you acquire knowledge also comes under the domain of Jupiter. Jupiter in Scorpio might have the tendency to dig deep into a subject until they unravel the hidden truths of it. Their knowledge is garbed, meaning others never find out how much they know or what research project they are up to. Jupiter in Gemini on the other hand gain knowledge through acquiring facts, possibly travelling to different places. Their knowledge is a product of gathering information than in-depth research. Jupiter in Gemini would focus more on the surface knowledge while Jupiter in Scorpio would look for what’s underneath.

Jupiter helps you aim for the Moon and fulfill your dreams. For ages, this star has guided travelers and in astrology too, it is symbolic of destiny and path towards happiness and fulfillment. Games of chance and speculation also falls under Jupiter’s realm. The way you try your luck is governed by your Jupiter sign too. If you have Jupiter in Scorpio, you won’t mind trying speculation and gambling but if you have Jupiter in Taurus, you would likely plough your money into safe investments like fixed deposits. Jupiter also relates to relaxation and indulgence, how you like to enjoy and leisure around. For Jupiter is Taurus, relaxation means tantalizing food and spa therapies, anything that stimulates their senses. Jupiter in Leo however may find relaxation in a luxurious resort only.

Career astrology is a highly evolved field. It can help you get ahead in life & achieve your goals.

Vedic astrology is a time-tested original ‘app’ that can map your career health beautifully on a real-time basis; that no other career guidance app can

This reading would help formulate your Career Strategy in the post-Covid scenario. A guided way-forward as destined by your planets would ensure a least

This reading is a deep study to unveil the true potential of your Career & the rise you should expect in this lifetime. Studied from Lagna, Moon & Saturn, it

When your money houses are activated to bring in easy money?
Vedic practices & suggestions to bring down obstructions in your Money Karma...

Having multiple planets in one house leads to an amalgamation of the energies of planets...

Astrology is relative. How a planet influences us is not just based on the house and sign it occupies but also the planets it is placed with. When a planet is

How a planet influences the native depends upon whether it is placed alone in a house or with other planets. Similarly, the effect of two planets conjunct..

Four planets in one house do not come together as frequently. Determining the influence of the energy of a combination of planets is difficult than interpreting

Divine nourishment of Jupiter through the Pushkar Navamsh

Pushkara is a very holy term in astrology as it indicates something which nourishes. Pushkara was a Brahmin whose real name was Tundila...

Importance of Jupiter in Vedic Astrology

Everything about Jupiter, the significations, the personality of those ruled by Jupiter, the positive & negative effects of Jupiter...

Understand the transit effects of Jupiter as it moves through the different houses of your horoscope...

Jupiter Bringing Luck and Success to You

Among all the nine planets in Vedic astrology, Jupiter has been regarded as the biggest benefic...