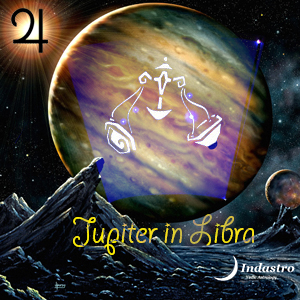 Libra is a movable air sign, ruled by Venus, which is a feminine watery planet. Jupiter is inimical towards Venus, which in turn is neutral towards it. Despite this inimical relationship, this position of Jupiter turns out positive, as both the planets are benefic in nature. People with Jupiter in Libra tend to have a pleasing appearance because Venus is beauty and Jupiter expands it. These natives have a strong interest in ornaments, luxuries and wealth generation. They tend to be very polite and mannered and they respect their guests a lot.

They also have faith in God. These natives are open-minded and have a strong sense of justice and of the right & wrong. They abide by strong moral principles and they get attracted to people who share similar idealistic views about life as they do. These people also have association with or assignments in foreign places. They do well in life and make the most of opportunities that come along, especially concerning the material aspect of life. These natives share a cordial relationship with people around them. They are also generous in nature, help those around them and also indulge in social service at times.