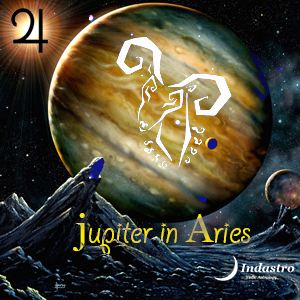 Aries is a fire sign ruled by Mars, which is also a fiery planet. Both Mars and Jupiter are masculine and share a friendly relationship with each other. Mars’ strong influence in this position makes the person argumentative but Jupiter also affords the person with wisdom, logic and intelligence so these natives tend to be less impulsive than those with Mars in Aries. Jupiter in Aries gives a strong hold over fields such as law because Mars’ energy directs the native’s mind towards argumentation. They are knowledgeable, philosophical, educated, and driven towards spirituality and higher learning.

Jupiter in Aries gives a strong foothold in spirituality and religious books. Jupiter also affords them with compassion and generosity. These natives specifically like to donate to charitable trusts and religious places. They imbibe innovation in their matter of study or practice. Their enterprising abilities are exceptional. There is a lot of creativity and energy in these people and also the ability to use these constructively. These natives do very well in sectors like banking because they are judicious and intellectual.