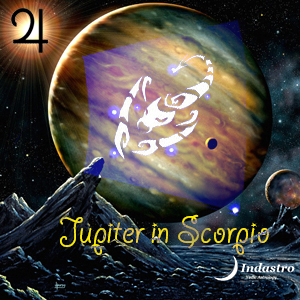 Scorpio is a fixed water sign, governed by Mars, a fiery planet, which is friendly to Jupiter that also considers Mars as a friend. Jupiter is the only planet to have ether as its element, also called Akaash, meaning ‘space’ in Vedic Astrology. This amalgamation of elements creates a balanced personality. Scorpio is known to be a vindictive sign, which is a false and harsh allegation but it’s true that Scorpio do not forget betrayal. Natives with Jupiter in Scorpio conduct their affairs in quite a serious and secretive way. They are quite passionate and determined, if they want something, they leave no stone unturned to get it.

They can also be diplomatic in their ways. There is also a streak of jealousy in their behavior. They are quite proud of themselves. They can also be selfish at times, which should be avoided. Their manner however is still poised and elegant so much so that you don’t understand when they wrong you. These natives have a strong intellect and also a flair of business. They do well in areas that require deep research. They also excel in finance and entrepreneurship. Their knowledge of spirituality is exceptional, but they are quite secretive about it. Others never find out how much they know.