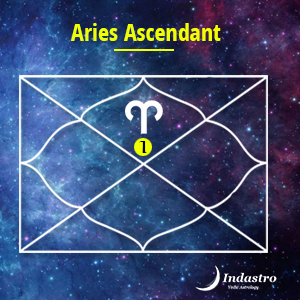 Natives having Aries Ascendant or Mesha Lagna are strong and straightforward. Their actions are marked by a streak of spontaneity. To think before an act is not their cup of tea. They rather trust their instincts and follow what they want without worrying about the outcome.

They are impulsive in their actions but not aggressive since here we are considering the Ascendant in its purest form without the influence of Sun or Mars, which is the ruling planet of Aries.

Natives with Aries Rising sign are assertive, not aggressive. What they need, they just pursue it relentlessly. Their intentions are always free from manipulation. They are quite youthful, energetic, and honest people.

There could be a feeling of competition as well, but generally, they push themselves to work hard than using malice or treachery. There is a strong desire to lead and win in all their endeavors.

They like to do things at the speed of light. Their attention span is short and when it combines with their quickness, what you get is a person who walks fast, eats fast, and even gets angry quickly. However, their anger is also quick to vanish.

If a native is born in Aries Ascendant or Mesha Lagna, he or she will never become resentful or revengeful. They forgive & forget.

As mentioned, people with the Aries rising sign have a short attention span so they cannot stand monotony. They seek change and action in life. They often struggle to finish what they start.

Their focus is on innovating and beginning than completion unless Mars is in a stable and ambitious sign such as Taurus.

Are you an Aries Ascendant / Mesha Lagna ? Find it out easily here!

When it comes to body parts, the Aries Ascendant or Aries Rising sign is associated with the head. People with the Aries rising sign often walk quickly with their heads tilted to the front.

Headaches are quite common with the natives with Mesha Lagna/ Aries Ascendant. This symbolically also refers to their ability to fight challenges head-on. Their upper body is usually broader and fuller than the lower.  They typically have a smiling face, which is full of energy.

Aries Ascendant people are generally independent, quite early in their life. They do not ask for support and try to sustain on their own for as long as they can.

Moreover, others do not rush to their help either since they seem to be so happy being on their own. This self-reliance and self-driven attitude is the key to their personality and is often the product of their previous experiences in life.

This independent and self-sufficient attitude does not mean that they are selfish. They tend to make compromises in relationships as long as they are with someone they like.

Minute scan of effects of planet transit on your career. Be ready for opportunities & challenges before they come up

Job, Business or Profession - get answer to the eternal questions - Industries, timing of move in jobs, highest growth time...

Find the career that works best for you. Your birth sign can show the way – garments, software, jewellery, architect...

Honest friendly discussion with our inhouse expert on your career trajectory. No questions are taboo during the chat...