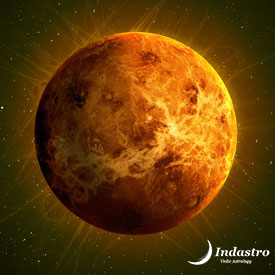 Mahadasha of Venus runs for as long as 20 years. It is a benefic and tender planet, watery feminine energy.

When Venus is benefic in the chart, it brings a lot of material comforts and prosperity. Native does well in artistic industries such as media, fine arts, dance, music, entertainment, etc.

Venus affords the native with magnetism to attract the opposite sex. It gives the comfort of vehicles, jewelry, luxuries, home, royal status, and profit from all aspects.

Antardasha of Venus leads to wealth gain and prosperity. Native gets to enjoy a lot of comforts, conveyance, new clothes, luxuries, perfumes, and so on.

Venus gives a better name and fame in society too. Along with financial gains, native experiences intensity of desires in personal life as well.

This Antardasha brings new relationships and also, romance in existing ones. It also brings love and passion back into your married life.

Native feels artistically inclined and becomes fond of creative pursuits such as fine arts etc. A lot of enjoyment and indulgence takes place during this period of Venus Antardasha in Venus Mahadasha.

The relationship between Sun and Venus is inimical so Sun somehow engulfs the positive impact of Venus here. While there would be slight progress in wealth, some challenges also persist in life.

Native tends to indulge in conflicts with family members and spouse.

During this time of Sun Antardasha in Venus Mahadasha, only sincere efforts can fetch good results.

Some enemies or opposition also tries to drag you down. Moreover, you feel a lack of support too.

This Dasha especially affects your eyes, head, stomach, and heart. The native should also beware of dealings with the government sector.

When these two watery feminine energies collide under an Antardasha, the native becomes fond of artistic pursuits and beauty such as music, flowers, fragrances, fine arts, etc.

Both these planets are tender, feminine, and benefic but exact results differ from chart to chart.

Moon Antardasha in Venus Mahadasha is not the time to go haywire but follow a righteous path. Inclination towards spirituality helps.

In this period of Mars Antardasha in Venus Mahadasha, your libido goes sky high too. You become aggressive and revengeful. There can be some hurdles at work so you should work towards controlling your behavior.

Health issues like fever, cold, blood infection, acidity, etc may persist too and some blood-related problems crop up too at times.

However, native also attracts a lot of wealth, ornaments, luxury clothes, etc during this period. If you are in the land, copper, or gold-related business, huge profits roll in during this period. Overall, this Dasha brings mixed results for the native.

Rahu Antardasha in Venus Mahadasha brings good news from children and relatives’ side.

However, native should exercise caution in situations involving fire, chemical, or poison. Some infection due to medication is possible too during this period.

You are able to defeat enemies during this time nonetheless. The negative influence of Rahu somewhat overshadows the benefic aspects of Venus so some challenges and difficulties persist during this period.

Native falls from the grace of seniors at work and loses position and wealth at times. Some bitterness and misunderstandings persist in relationships as well.

While the relationship between Jupiter and Venus is inimical, both these planets are benefic by nature. Jupiter in fact is considered the most benefic planet in Vedic Astrology.

Some inclination towards spirituality is also felt during this period of Jupiter Antardasha in Venus Mahadasha.

Native gets a lot of recognition and fame in their social circle. Jupiter also expands one’s knowledge and intellect.

Native spends a pleasant time with spouse and children and also observes elevation in career.

Saturn is malefic while Venus is benefic. Since both planets are friends with each other, Saturn’s negative impact alleviates to some extent. The results of Saturn Antardasha in Venus Mahadasha are average in turn.

While the native is likely to experience disputes in married life, he or she enjoys a lot of comforts and luxuries too during this period.

Obstacles in career and social life cause some disturbance in life. Health issues and financial hiccups also persist on account of rising expenditure.

On a positive note, this period is marked by increased religious inclination. This is the period of hard work. If you invest serious efforts, results would be somewhat positive.

Venus and Mercury are friends with each other. Moreover, both the planets are benefic by nature.

If this Dasha is free from affliction, then the native enjoys a comfortable and enjoyable life with children. Native leads a satisfactory life with friends and family.

Relationship with spouse and other members of the family also remains stable and happy. You become more sincere towards relationships.

Happiness can be felt in abundance in all matters. Mercury infuses the right amount of wisdom to strike opponents down and rise to fame.

Mercury Antardasha in Venus Mahadasha is a great period for people who participate in creative competitions such as debate, arts, poetry, writing, or painting.

Ketu is a malefic planet so it weakens the positive impact of Venus here. Native experience an increase in bitterness in relationships, which can create some distance. Lack of mental peace also persists during this period.

A lot of obstacles keep you from treading towards success, especially in your career. Native may lose his position at work or suffer some loss.

Some unwanted travels also take place during this period. You should be very careful as your enemies try to drag you down as well.

You should also check your medication as you could end up with some infection due to wrong medicinES during this period of Ketu Antardasha in Venus Mahadasha.

Minute scan of effects of planet transit on your career. Be ready for opportunities &...

World Youth Skill Day - Most suitable skill for your Zodi

To flourish in your career, you need to have certain specialized skill set. Find out ...

Were there stages in life when your cash flow was quite positive while at other times...

How Stressed can you get : Triggers and Coping Mechanism

Stress, inevitable as it might be, has powerful reasons behind it. What can be stress...

Everything about Venus: Learn Astrology

Are you a combination of ‘attractiveness & brains’ with an ability to win over ot...

All those Venusian Secrets

Who doesn’t love Venus - the planet of love, beauty, luxury, and marriage! Do you h...

Venus : How it affects your Love Life?

Venus gives an abundance of wealth, beauty, prosperity and happiness; and if adversel...

Venus Saturn and Saturn Venus are said to be difficult dasha periods. They can make y...