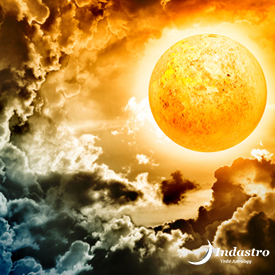 People under Sun Mahadasha/ Surya Mahadasha often enjoy a good social standing because of support and favors from eminent people of authority and government. This Dasha almost lasts for 6 years.

Sun is a powerful, progressive, and potent planet, held to be supreme among the imperial stars. Its luminosity gives optimism, authority, cheerfulness, and potency and its heat gives aggression and arrogance. It is the life-giver among all planets.

Such natives also enjoy an authoritative position themselves but may also suffer estrangement from the family. These natives enjoy ample wealth and gain from multiple sources of income, especially related to weaponry, fire, state, property, and medicine.

Moreover, it makes one anxious and restless, due to recurrent fears of theft, enmity, authority, health problems, and fire.

But despite these vicissitudes on a personal level, such a person has a good social life.

This Antardasha makes you very powerful in a horoscope. During this period, the person will enjoy authority, success, and acclaim in the social circle. If Sun is positively placed, native may also get monetary gains during this period of Sun Antardasha under Sun Mahadasha.

In terms of career, the native would likely reach a better position and could be victorious in whatever disputes and competitions that he or she gets involved in.

Lots of travels may also take place during this time.

This period also suggests mental unrest due to impatience.

Sun and Moon are friendly and benefic planets so their association often results in positive outcomes. Together they balance each other’s energies like Father and Mother.

One is aggressive and energetic while the other is calm and nurturing. The person in Dasha of Moon in Sun earns respect, recognition, authority, victory, and financial gains as well.

Moon Antardasha under the Sun Mahadasha period could be the most comfortable and affluent part of the native’s life.

There could be some disputes and mental unrest too but overall, this period is marked with some important transitions and happenings in life.

On the negative side, natives can experience discords with authority, jail sentence, fear of theft & water, and challenges.

Mars Antardasha in Sun Mahadasha means unification of the energies of two influential planets. This makes an individual strong, dominant, and fortunate to enjoy authority too.

This phase is filled with affluence, luxuries, and material comforts. Some sacred events may also take place in life during this Antardasha. Family life remains content.

The negative aspects of this period of Mars include lack of harmony, mental unrest, occasional failures, loss of close ones, and discords among family members. Dissatisfaction due to lack of support or issues with the government may also come.

The benefic presence of the communicative and creative Mercury under the strong and steady Sun creates some ebb and flow in life, which keeps the native disturbed.

Those under the influence of this planetary Dasha receive both support and distress from the close ones. There is also a possibility of some important transitions and events in life, such as a huge accomplishment.

Nevertheless, the path to success wouldn’t be a smooth sail. Some mental unrest and health complications may persist throughout. Name, fame, social acclaim, and respect may increase at the same time.

The combination of Jupiter with the Sun is usually positive as it leads to improvement in several spheres. Jupiter awards the person with higher wisdom, mental peace, and knowledge during this period of Jupiter Antardasha under Sun Mahadasha.

It makes you a righteous, moralistic, and socially respected individual. The person may tread on the spiritual path while experiencing financial growth at the same time. So overall, this is going to be an affluent period for the native.

Venus, the feminine and soft planet will feel safe under the masculine and resolute Sun. This may not however be a completely positive period.

The native under this period of Venus Antardasha under Sun Mahadasha, will enjoy all the luxuries and comforts in life but at the same time, may become a spendthrift and indulge in useless quests.

Thankfully, financial standing helps cover the rising expenses. Despite enjoying a dominant and respectable social position, the person may not feel content on a personal level.

Travel and auspicious activities could take place during this period too. Some negative aspects that may destroy the bliss include mental unrest, fall from the position, and health issues such as fever and pains.

Saturn Antardasha under Sun Mahadasha may not be that positive owing to Saturn’s influence, which is a malefic planet.

Some challenges in studies and career may crop up, maybe due to a lethargic attitude you carry. Income may fall and overall, the person will have to work hard to realize ambitions.

The number of enemies could increase but the native is usually in the winning position. Success and recognition may come but after difficulties, which may lead to distress.

However, some sacred activity may take place too. An important achievement can take place towards the middle of the Dasha but in the end, distress due to distance with near and dear ones may bother.

If negatively placed, these planets may cause loss of wealth, sentence, lack of peace, and fever.

These two planets do not share a friendly relationship so this Dasha may cause some havoc in life. Disputes and losses may keep the native bothered during this time.

Enemies could get stronger. Moreover, lack of support and harm from close ones may further add to distress. Loss of position and authority may lead to a downfall in social standing and wealth loss is also possible.

During this period of Rahu Antardasha under Sun Mahadasha native needs to be cautious. However, do not worry because bad days won’t last forever. In between, the native may enjoy wealth, recognition, and respect too.

This combination of Dashas can bring hurdles in life. Owing to Ketu’s influence, native would struggle to come up with solutions so might end up in distress.

Career and finance may become areas of concern. Moreover, loss of someone important, health problems, and fear from the government are also possible during this period of Ketu Antardasha under Sun Mahadasha.

Support from close ones and friends will help stand strong during these times. Patience and hard work would be the keys to get past this period without much damage.

This reading decodes your ‘Wealth Accumulation’ potential. The strength of your birth chart elements...

In astrology, a great importance has been attached to the rising sign - the lagna or the ascendant. Indu Lagna is likewise key to finding your financi...

Jupiter is a 'giver'. It is the planet of expansion. It is known to grow the aspects of life it touches upon in your horoscope...

Will you be super rich in this life?

It is possible to know about the lifestyle of an individual by reading his horoscope. Wealth is assessed by the strength of Venus, Jupiter, 5th, 9th a...

Making Vedic Astrology the most authentic, Yoga Analysis helps you to understand the influence of such Yogas to utilize the favorable periods to your ...

Planetary Transits and their effect on your day-to-day life to help us to unravel future forecast trends and development due to these astrological shi...

Transit of Sun & its effects