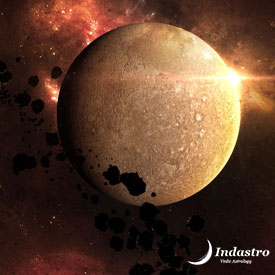 Mercury’s Mahadasha runs for as long as 17 years in one’s life. During this period, native observes changes in the level of creativity, intelligence, management skills, communication, speech, and so on.

For students, Mercury’s Mahadasha is a favorable period to study political science, diplomacy, and commerce.

Native feels a lot of peace of mind in familial matters too.

If Mercury is a week or afflicted during this period, the native has to suffer from nervous disorders, skin problems, mental issues, lack of concentration, memory loss, and defame too.

During this period, native enjoys benefits due to improved intellect and better learning ability. Concentration in studies also improves. This is a period of achievements essentially.

Native becomes a lot more creative and articulate in speech. Their calculation also improves. Native does well in debates and communication, accountancy, and banking.

The relationship with family also improves during this period of Mercury Antardasha in Mercury Mahadasha.

If malefic influence is present, the native may suffer from mental problems and lack of concentration. Some memory or nervous system related issues also crop up during this period.

Ketu Antardasha in Mercury Mahadasha gives an airy mind to the native. A lot of difficulties and problems enter the native’s life. Confusion and misunderstandings persist during this period.

This period also affects one’s professional and financial progress and expenditure often shoots up during this Dasha.

This period also makes you fond of languages.

If malefic influence exists in the chart, the native feels tensed mentally and may also develop a tendency to set unrealistic expectations.

During this period, natives get a lot of support from friends and employers. Venus Antardasha in Mercury Mahadasha brings a lot of wealth and profit in business for the native.

This is a good time as the person gets a lot of recognition due to their intellectual abilities.

Romantic feelings also make way into the heart. Native wants to spend time with loved ones.

If malefic, this Dasha can lead to distance in relationships. Native may encounter defame due to association with women. Problems like headache, fever, and stress may also persist.

The relationship between Sun and Mercury can be termed friendly. While the fiery Sun gives the necessary confidence to the native, earthy Mercury keeps the native grounded.

Knowledge and learning abilities improve during this Dasha. Planets form a strong possibility of a government job for the native.

Comfort and peace prevail at home and in relationships. The native feels spiritually inclined too. The society also helps and supports a lot during this period.

This is a positive time for jobs in banking, teaching, administration, accountancy, law, and other high-end fields.

Native enjoys a happy period with spouse and children during this Dasha. The relationship between Moon and Mercury is average. Since both are benefic in nature, results are often positive.

Native under this Dasha develops a penchant for arts, music, and creative fields.

Happiness in familial matters persists throughout in period of Moon Antardasha in Mercury Mahadasha.

During this time, native works harder to get success. However, the native sometimes suffers exhaustion due to some tensions.

If under malefic influence, this Dasha can cause mental distress, lack of concentration, and problems in career matters.

Mars is inimical towards Mercury which in turn is neutral. This is not a positive period overall. This Antardasha increases aggression and argumentativeness in speech.

Nevertheless, native enjoys the comforts of having a home and vehicle. Family life remains blissful during this period of Mars Antardasha in Mercury Mahadasha.

While Mars creates some hurdles, Mercury gives the maturity and intellect to deal with situations effectively. Native stays in trouble due to opposition and enemies.

The native under this Antardasha gains a lot of respect from others. Interest in religious pursuits increases during this time.

However, he or she may develop fear from water and experience confusion in mind.

The person faces a lot of issues in career matters, this period is marked by an increase in hard work and stress.

Misunderstandings prevail in married life thus will feel distressed with your spouse too. The native feels depressed and dissatisfied at times.

There might be a lot of hurdles in the path to success but native continues to work towards it.

These two are the most benefic planets in Vedic Astrology. This is a good period to get married. Native maintains a happy relationship with spouse and children.

Native gets positive results in studies too. Their mental strength and level of understanding also improve.

Natives under this period of Jupiter Antardasha in Mercury Mahadasha earn a good position in fields such as banking, astrology, law, debate, research, and so on.

Saturn is a malefic planet but it shares a friendly relationship with Mercury. While some hurdles are there, results are often positive at the end.

Life is a little harsh during this period of Saturn Antardasha in Mercury Mahadasha. Work pressure increases but you may not get the desired results of your efforts.

Native gains a lot of inner strength and treads on a virtuous path. Minor problems may persist in career and financial matters but the native gets through with this Dasha without much damage.

If any affliction or malefic influence is there on these planets, native might suffer from gastric issues or body aches. Native also feels unnecessary distress at times.

Career astrology is a highly evolved field. It can help you get ahead in life & achieve your goals.

Vedic astrology is a time-tested original ‘app’ that can map your career health beautifully on a real-time basis; that no other career guidance app can

This reading would help formulate your Career Strategy in the post-Covid scenario. A guided way-forward as destined by your planets would ensure a least

This reading is a deep study to unveil the true potential of your Career & the rise you should expect in this lifetime. Studied from Lagna, Moon & Saturn, it

When your money houses are activated to bring in easy money?
Vedic practices & suggestions to bring down obstructions in your Money Karma...

Mangal Dosha assessment in the horoscope and the required remedies that help lessen its effects...

If your chart has a specific configuration of planets,  then there are some special meanings attached to it

Astrological Remedies is the most mysterious and complicated part of Indian astrology. We assess the effects of

If you want to be a good writer, then you should have a good Mercury. If you desire t...

Virgo is the exaltation sign of Mercury. How transit of Mercury would affect your Moo...

Gemini is ruled by Mercury. It is an air sign and represents communication, logic, th...