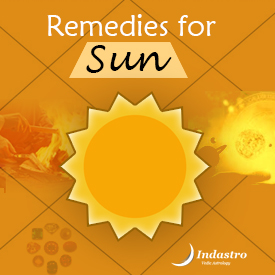 As Sun has the capability to fade away the darkness on earth; it can also evade the negativity in your horoscope if it is positively placed. Remedies for Sun are very important to get balance support from the Sun.

Sun is the epitome of confidence and spirit, ambition and cheerfulness, wisdom and warmth, royalty and charisma. At the same time, it can also make you introverted, arrogant, egoistic, jealous, irritable, pompous, and prone to psychological problems.

Indications of a weak Sun:

Though an expert Vedic astrologer should be consulted before practicing any remedies for Sun. Still, some indications of a weak Sun or malefic influence of Sun are: