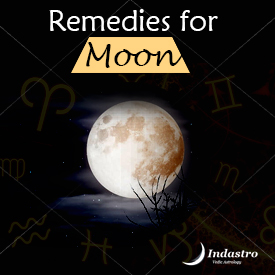 Moon, the queen among the imperial stars is considered the most influential planet in Vedic Astrology. Remedies for Moon are very significant, the Moon sign is held to be more important than the Sun sign.

This is because Moon controls our emotions and mental capabilities, and nothing affects us more than how we feel (emotions) and how we deal with these feelings (mind).

When Moon is weakly positioned in a horoscope, it can lead to mental disorders. Moon is also about our interests and inclinations, thus when weak, it causes a lack of interest in anything.

The person becomes pessimistic and doubtful about life. Depression is also possible and to come out of it, these natives tend to resort to alcohol, which further drowns them into stress.

Such people are prone to distrusting their partners and indulge in conflicts with them. They do not pay attention to their mother.

Some natives under the influence of a bad Moon spend most of their time in a deserted area. The person spends more time fantasizing than in reality.

If too bad, Moon can also cause excessively sensual thoughts and an unstable mind,

Moreover, due to all this, they tend to lose crucial opportunities for growth in life bestowed by other planets. Moon thus has a profound influence, what is given above is just part of the picture.

Here are few remedies for Moon that one can perform to lessen its negative impact.