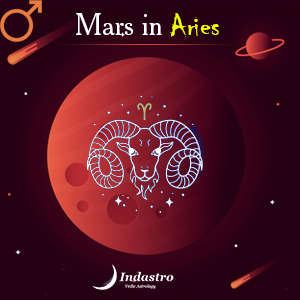 Mars, a masculine and fiery planet has Aries as its own sign; so naturally, this position is considered positive for Mars. People born with such a placement of Mars are quite strong, sturdy, aggressive, dominant and high in energy and stamina. These people are fond of indulging in physically demanding activities. They do well in military, police and other challenging areas. Such people are quite original in their ways. They like to work on their own and like to create new ideas than follow the existing ones.

Their life is a series of adventures. These people love to take part in adventurous activities. They are quite intelligent and decisive. There is a certain swiftness in their personality. They like to do things fast, including driving which can be risky at times. These people also have an argumentative nature. They do well in debates but often end up hurting people with their tone and aggressive instincts. These natives cannot stay at one place for long. Along with temper, their character is also marked by a streak of egoism. They are however quite honest in their dealings and say what’s in their heart. Mars in Aries people are impatient, reckless, innovative, spontaneous and straightforward, quite like an open book.

Do you have the Speculative Luck? Which sectors would give your gains and which are a risky investment for you?

Luck in business & the time period when it will prevail. Suitable business line & Vedic remedies to clear obstacles...

The right kind of investment mix that can help you make riches while minimizing your risk...

Is your partner adding to your business or is detrimental to it? Are you gaining from the partnership?

Mars is your energy, attitude and confidence. Understand interesting facets on Mars.....

As per Vedic Astrology, weak Mars could mean different things for different ascendant...

Mars is like a personal motivator, who gives you courage and the drive to take initia...

Mars signifies physical strength and confidence in an individual. It rules over the b...