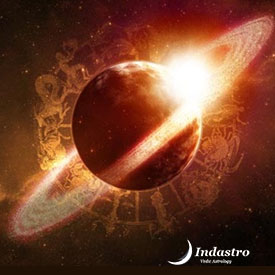 Saturn is the lord of karma, and the results of our past karma manifest most perceptibly during Sade Sati. It is the 7 ½ years period of Saturn, which starts as when transit Saturn occupies the house just preceding natal Moon. Saturn spends around 2.5 years in each signs so Shani Sade Sati starts from the time Saturn enters into the 12th house from natal Moon to when it leaves the 2nd house from natal Moon. Sade Sati is feared by many due to the ill effects associated with the period. Saturn is a malefic planet so native has to struggle during Sade Sati but there is nothing to be scared of. Saturn works much like a guardian, grabbing us by the collar and making us see the reality. It punishes us for our mistakes, much like our parents, but not out of contempt but to teach us crucial life lessons.

Saturn is poison and Moon is milk, when transit Saturn is close to natal Moon, it is bound to contaminate the native’s life to some extent, depending upon the sign where it is placed, relationship with the lord and overall strength of Saturn. The closer Saturn is to the natal Moon, the severe would be the results. Naturally, the second phase of Shani Sade Sati is most feared as natal Moon is conjunct Saturn during this time. However, the severity of results depends upon which sign Saturn is placed in. The results of Sade Sati can also be somewhat positive at times.

Saturn takes around 30 years to move through the whole zodiac, spending 2.5 years in each sign. Even if Saturn transits to a positive house and sign, you might still experience mental distress and confusion to some extent. This is because Saturn poisons what Moon represents, mind and emotions essentially. Your thought process suffers during this period and you may have to go through many emotional crises too. Throughout one’s life, native usually experiences Sade Sati twice as Saturn completes one round of the zodiac in 30 years.

Certain signs tend to be more vulnerable when it comes to the impact of Sade Sati. Saturn usually brings mixed results for natives having Taurus, Libra, Capricorn and Aquarius as their Moon sign. Saturn is exalted in Libra while Aquarius and Capricorn are its own signs. Taurus is ruled by Venus, which shares a friendly relationship with Saturn. Sade Sati turns out particularly bad for Cancer natives, ruled by Moon and also Leo as Saturn and Sun are inimical to each other. The Sade Sati of a Cancer Moon sign native would begin when Saturn enters Gemini, so the first phase would be average.

However, once it enters Cancer Moon sign, the unpleasant 2nd phase of 2.5 years would begin for Cancer natives. And when it moves into the third phase in Leo, things would still be worse as it is again an enemy sign. Similarly, for a Leo native, the first phase of Sade Sati would begin when Saturn moves into Cancer, a bad time most likely. The second phase when it enters into Leo itself would be equally bad but the third phase would be somewhat okay as Virgo is ruled by Mercury, which Saturn considers as a friend. Jupiter is neutral to Saturn so if Saturn moves into a Moon sign ruled by Jupiter, results would be average. The actual results depend upon several other factors too such as which Mahadasa and antardasa of planets the native is going through and where do rest of the planets sit in the horoscope.

Sade Sati can be positive for the native if Saturn is the Yogakaraka planet in the chart. The closer transit Saturn is to natal Moon degree, the gravest can be the influence.  Not just natal Moon Nakshatra, Saturn gives malefic results in or close to ascendant (rising sign) Nakshatra as well.