Lord Ganesha is worshipped on this day for the removal of obstacles, for new beginnings, wisdom, prosperity, and good fortune. Read this article for auspicious time & procedure to perform the Puja, sacred verses to chant, legends, & the science behind the prohibition of Moon sighting on Ganesh Chaturthi.

Ganesh Chaturthi is celebrated as the birth anniversary of Lord Ganesha. It is regarded as the day when he descended from Mount Kailash with his mother, Goddess Parvati. Hence, he is worshipped on this day for the removal of obstacles, new beginnings, wisdom, prosperity, and good fortune. Lord Ganesha was born on Shukla Paksha of Bhadrapada month, which mostly falls in the month of August or September by the English calendar.

How is this festival celebrated?

A festive day, Ganesh Chaturthi is celebrated and observed by installing the Lord’s clay idols at homes and also in public, at temporary stages put up by devotees. Mantras (sacred verses) are chanted, prayers and flowers offered, and ‘prasad’ – which is essentially devotional offering blessed by the Lord – is distributed. The ‘prasad’ includes sweets like Modak and Laddoo. At a few places the festivities continue for ten days, ending on Anant Chaturdashi with Ganesha Visarjan – an act that marks the immersing of Ganesha’s idol in water, signifying his departure to his abode in heaven. Devotees dance and take out procession on streets accompanied by music and when they immerse the Lord’s idol in the water, they pray to him to come and visit their place next year.

It is believed that Lord Ganesha was born at Madhyahna, i.e., Midday. As per Hindu division system, the time duration is split into five equal parts. These parts are spread over sunrise to sunset and are known as Pratahkala, Sangava, Madhyahna, Aparahna, and Sayankala. Ganesha Sthapana and Puja on Ganesh Chaturthi are done during Madhyahna, which is considered to be the most appropriate time for Ganesh Puja.

What does ‘Chaturthi’ mean?

Chaturthi implies a state beyond that of awakened (Jagruti), dreaming (Swapna) and deep sleep (Sushupti). Hence, it is also referred to as Turyavastha or the transcendent state. Reaching ‘chaturthi’ is the goal of a seeker. The chaturthi of the bright fortnight, i.e., the fourth day of the waning moon (lunar phase) of each month is called ‘Vinayaki’ and that of the dark fortnight is called ‘Sankashti’. If this chaturthi falls on a Tuesday, it is called ‘Angarika Chaturthi’. During Vinayaki, one should observe fast and pray to Lord Siddhi Vinayak for good health, happiness and prosperity. The dark fortnight which is called Sankashti means calamity. This is the time when earth emits negative energies at its highest level and Lord Ganesha, being the remover of negative forces, should be prayed for well-being.
Angarika Chaturthi corresponds to ‘Angarak’, another name for Mars.  Shri Ganapati is the presiding Deity of Mars, as well as Earth. Both Shri Ganapati and Mars have the same complexion. If you pray to Lord Ganesha during this day, the negativity of the planetary alignment of Mars, Earth and Moon during this day gets destroyed. It is an observance which lasts five ‘prahars’ (unit of time), four during the day and one at night. According to the ritual, a meal should be taken at moonrise and it is considered part of the ritual, not as breaking the fast.

The story of Ganesh Chaturthi

Goddess Parvati was the creator of Lord Ganpati or Ganesha. She, in the absence of Lord Shiva, used her sandalwood paste to create Ganesha and gave him the task of guarding the entrance while she went for her bath. Lord Shiva, Goddess Parvati’s husband, arrived shortly and Ganesha refused entry to him as his mother had instructed that nobody should be allowed in. Lord Shiva cut off Ganesha's head in a rage. When Parvati saw what happened, she assumed the form of Goddess Kali and threatened to destroy the world. When everyone saw her rage and form, they hurried to Lord Shiva and requested him to find a solution.

Shiva immediately ordered his followers to go find a child whose mother wasn’t attentive to the child and bring the head. The first child the followers saw was that of an elephant and they, as ordered, severed his head and brought it to Lord Shiva, who right away placed the head on Ganesha's body, bringing him back to life. Maa Kali was thus calmed and Goddess Parvati took over, overwhelmed. All the Lords blessed Ganesha and Ganesh Chaturthi is also celebrated as a tribute to this story.

Why is Moon sighting prohibited on Ganesh Chaturthi?

Legend goes that when Lord Ganesha was returning home on his vehicle (‘vahana’), which is a mouse, on a moonlit night on Chaturthi in the Bhadrapada month, the Moon God poked fun at the Lord's round belly and his vahana. This upset Lord Ganesha and he cursed the Moon God by saying that his light would never fall on earth.
Fearing that his existence was stake, the Moon God apologised. But since Ganesha had already cursed him, he wouldn't nullify it entirely and thus ended up saying that sighting the moon on Chaturthi would amount to ‘Mithya Dosha’ which is as good as a curse. It is believed that Mithya Dosha subjects one to false accusation of stealing as well as humility and poverty.
Shri Krishna is also supposed to have suffered from the effects of Mithya Dosha after he saw the moon on Chaturthi. He was accused of stealing the precious gem Syamantaka. Sage Narada, who knew about Lord Ganesha's curse asked Shri Krishna to observe a fast to come out of Mithya Dosha unaffected.


Mantra (sacred verses) to overcome the ill-effects of Mithya Dosha


What is the science behind this prohibition?
In the planetary system, the moon is fickle, that is to say - it undergoes phases of waxing and waning. Likewise, our mind – since our thought process is controlled by the Moon - is fickle. During Chaturthi ‘tithi’ (a time duration), which occurs in fourth day of waxing Moon, the Sun, Moon and Earth are in such angles that the moonlight which falls on earth is negatively charged.

Seeing the Moon in such a condition increases the fickleness of the mind by 1/1,00,000 times. Also, on this day, there can be hormonal imbalance in your body, which creates a high level of stress. So, to negate stress to a certain level, it is said to observe fast and avoid the sighting of Moon during the fourth day of waxing Moon.

On Ganesha Chaturthi, devotees also perform ‘Eka Vinshati Name Ganesh Puja’ and ‘Lord Ganesha Anga Puja’ along with the below Shodashopachara Puja, i.e., worshipping the Gods and Goddesses with 16 rituals to bring prosperity and abundance. 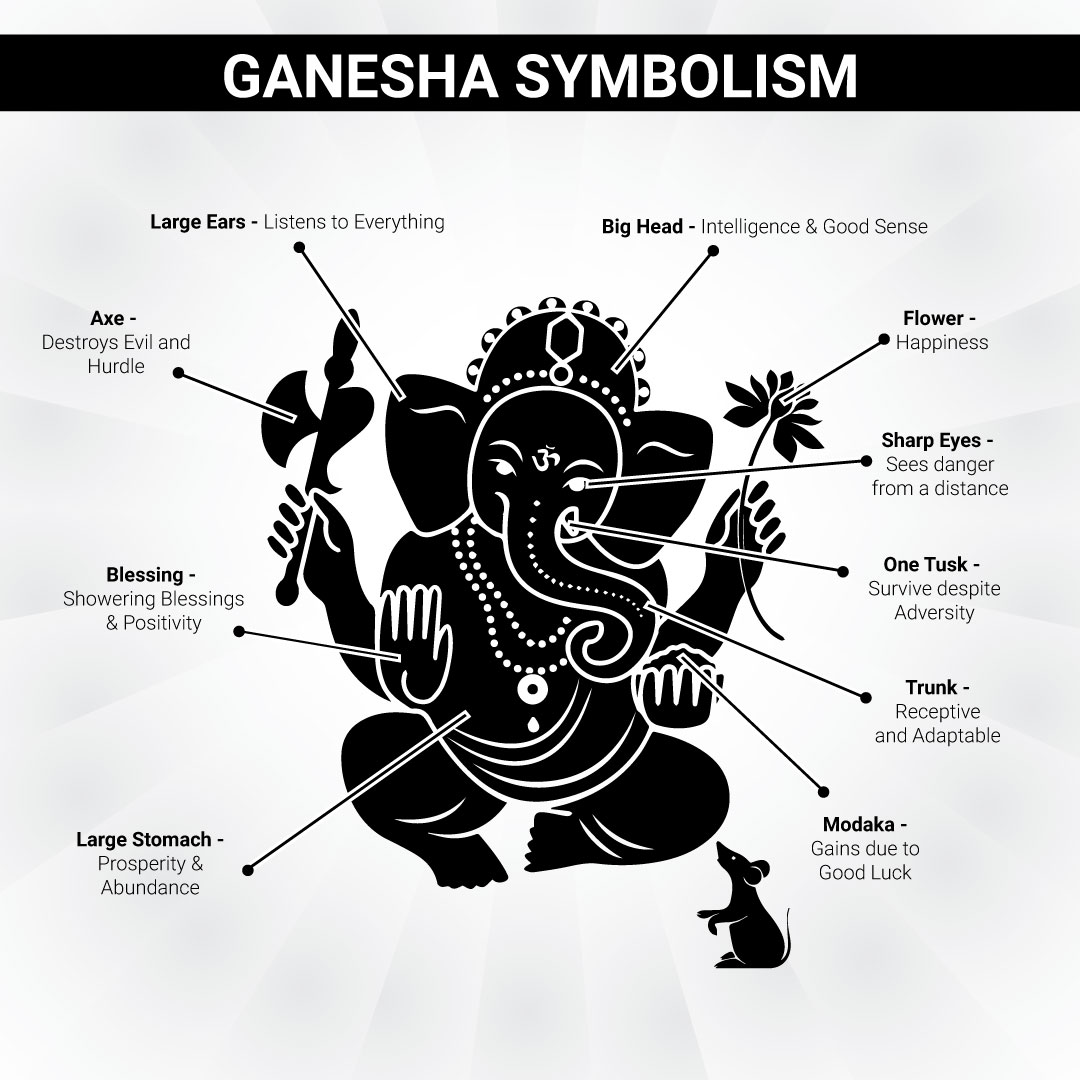 
Pratishthapan (प्रतिष्ठापन) - Bringing Life to the Idol: After Lord Ganesha has been invoked, his energy is invoked in the idol with the following mantra.


Asana Samarpan (आसन समर्पण) – Offering Seat: After Lord Ganesha has been invoked and installed, take five flowers in ‘Anjali’ (by joining palm of both hands) and leave them in front of the idol as an offering of seat to him.

Padya Samarpan (पाद्य समर्पण) – Washing of Feet: After offering Asana to Lord Ganesha, offer him water to wash his feet.

Dhoop (धूप) – offering of Incense: The next step is to offer incense to Lord Ganesha.

Deep Samarpan (दीप समर्पण) – Offering of a lamp: Lord Ganesha is then offered a lamp (‘deep’) while chanting Mantras.

Naivedya and Karodvartan (नैवेद्य एवं करोद्वर्तन) – Offering of Sacred Food and Sandalwood: Offer fruits and food like modak, laddoo, etc. to Lord Ganesha, followed by a mix of sandalwood (‘chandan’) and water.

Tambula, Narikela and Dakshina Samarpan (ताम्बूल, नारिकेल एवं दक्षिणा समर्पण) – Offering of three items: The next step is to offer betelnut (‘tambula’), coconut (‘narikela’) and an honorarium (‘dakshina’) to the Lord.


Post this, offer ‘pushpanjali’ (flowers) to Lord Ganesha and then his idol is immersed in water as a symbol of starting his journey towards his abode in heaven. The following Mantra is chanted during Visarjan.