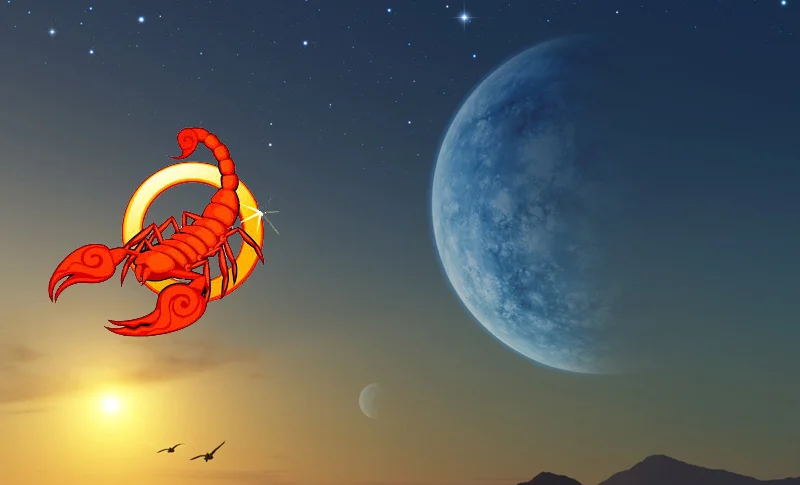 Every year, Jupiter transit brings substantial changes in our lives, since it is the biggest planet in our solar system, also considered the lord of fortune in Indian Astrology. It is a slow-moving planet and stays in one sign for around a whole year, thus its influence is even more important. This year, Jupiter is going to enter Virgo on 11th August, 2016 and would retain its position there until 12th September, 2017. Jupiter’s transition to the sign of Virgo is auspicious in general.

Are you a Scorpio Moon Sign
? Find it out instantly.

It is likely to fulfill wishes, bring recognition, and boost wisdom as well as prosperity. Scorpio in particular would fulfill their responsibilities with dedication and achieve respect in return. Overall, the transit is positive for Scorpio, as your efforts would be rewarded with success. A wave of enthusiasm and devotion towards your work would keep you busy and active during this period.  However, some glitches may bother in between. Here is an in-depth analysis of Jupiter Transit for Scorpio based on key Indian Astrology interpretations.

Career: The transition seems to be a blessing in disguise for the career front. You would perform well at work and get noticed for your hard work too. Support from seniors would also help you advance further in career. Nevertheless, there could be some issues with the authority at work, which may affect you slightly and could sour the relationship with seniors. If you keep ego out of the court and do not argue with your supervisors, it would be easy to get past this duration with excellence. Continue working hard and you would get positive outcomes gradually.

Finance: Jupiter’s position in the 11th house of Scorpio creates a powerful ‘Dhana Yoga’. You would do exceptionally well on the financial front. Your monetary standing would improve. Wealth would knock the door often, from sources more than one. Income is likely to shoot up as well, thus you would be able to handle occasional issues impeccably. It will be an affluent year overall as all your decisions would lead to good returns and positivity.

Love and Marriage: The period is auspicious for love life as well. Those waiting to take the relationship to another level would be rewarded with marriage prospects. For married couples, this period seems to be amazingly romantic and rewarding too. You are likely to welcome a new member in your family, as progeny possibilities are high. Problems persisting for long would finally show improvement. The relationship with spouse would be cordial, as level of understanding would perk up.

Family: This would be an eventful period on the family front; nevertheless, domestic bliss would be there. There could be some auspicious celebration at home, which would keep you occupied. There Also, a new addition in family might keep the atmosphere happy and content. This is a very positive and productive period for children overall. Some problems may however persist, but there would be considerable improvement compared to the previous year.

Health: You are likely to enjoy a good health, thus it is a favorable period to take up new projects. Nevertheless, if you wish to make the most of this time, it would be in your best interest to cast off lethargy from your life.

Education: This is a felicitous period for education matters too. Performance of students would be satisfactory in studies.  The transit would make them a little contemplative and thoughtful too.