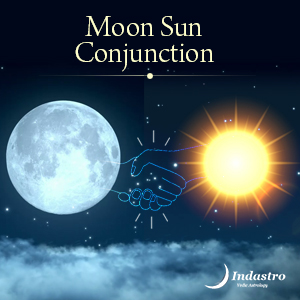 Moon has a friendly relationship with Sun but their energies are vastly different. One is hot and fiery while the other is calm and compassionate. When their energies combine in trine or 10th house or in their own signs (Cancer, Leo and Aries), their effect is mostly positive. Such a person is courageous and confident but at the same time, harsh and wicked. Sun conjunct with Moon in horoscope also makes the native diplomatic.

Moon-Sun conjunction gives the person a dissolute and conceited character. Such people easily submit to carnal desires. Their arrogance could manifest in rude behavior towards people. One could perform remedies for Moon in order to get rid of such a situation. If under the influence of benefic planets, such a person can become a philosopher or sage. Moreover, the conjunction also results in the native having humanitarian tendencies and at the same time, promotes success and fame of the individual.