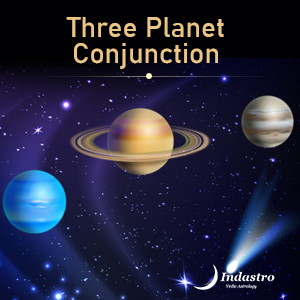 How a planet influences the native depends upon whether it is placed alone in a house or with other planets. Similarly, the effect of two planets conjunct together is wholly different from how conjunction of 3 planets affects the horoscope. When three planets fall conjunct in major houses like Ascendant, 5th, 7th, 9th, or 10th house, it makes the native a multi-tasker. Such a person has the ability to get involved in more than one interest, hobby and occupation. However, it depends upon which planets are placed together and the house they occupy.

If the 3 planet conjunction is positive, it lessens the impact of any negative aspect of other planets too.
When dasa of a single planet starts, the rest of the two planets would also get activated, bringing a lot more benefits than just one planet could in relation to the house of placement. However, it can also go the other way round if the conjunction is negative and the inauspicious effects may multiply.

You can read more in the subsequent pages on how the 3 planets conjunction works in a horoscope.