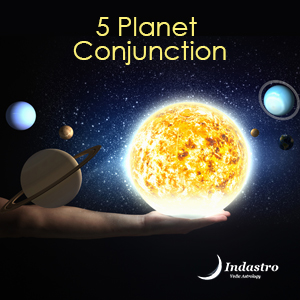 Having five planets in one house is a rare phenomenon in a chart. Usually, an amalgamation of the energies of so many planets isn’t positive as the malefic and benefic effects get jumbled up. If a benefic planet will be under malefic influence, it won’t function at its best. On the other hand, malefic planet may have no hindrance in casting its negative influence, since the benefic planets will be weak. The area of life that the houses these conjunct planets eats up most of the native’s energy.

Despite being the focal of attention, the native feels a very confused in the dimensions that this house represents. The energies of the planets conflict with each other, leaving the native perplexed as to which of the planets should be followed. The likelihood of having all positive planets with positive lordships is almost nil which is why 5 planets conjunction does not yield positive results most of the time.  You could read a comprehensive analysis of the influence of possible five planets combinations in Vedic astrology in the subsequent pages.