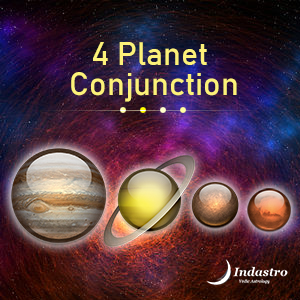 Four planets in one house do not come together as frequently. Determining the influence of the energy of a combination of planets is difficult than interpreting a single planet in a house. 4 planets come together only a couple of times a year while 4 babies get born every second. You can imagine how rare this astrological phenomenon is.  The house that these planets are placed in plays a crucial role. It is almost unthinkable that all the planets would be positively placed in a house as each planet carries two lordships, except Rahu and Ketu of course. The conjunction of four planets usually yields mixed results, depending upon the lordship of the planets involved.


Please note that a planet may not be placed in its own sign. The planet thus also carries the signification of the house where its own signs are placed. If a planet carries 8th house lordship in a house while conjunct other planets, the lordship would also affect the other planets negatively.
Conjunction of multiple planets multiplies the events associated with that house. For instance, if 4 planets occupy 11th house, native may earn from more than one source but at the same time, this placement would also lead to high level of desires and expectations. If 4 planets conjunction takes place in 10th house and is under some malefic influence, the native would experience ups and downs in business or change in jobs frequently.

If the same conjunction takes place in 7th house, native may marry more than once. Whether the results of the conjunction are positive or negative depends upon lordship of planets and the strength of planets, whether they are under any affliction (debilitation, aspect, or negative relationship).

You can read in the subsequent pages an overview of different four planets conjunctions and their possible outcomes. However, keep in mind that the results may differ when the house and sign of placement are considered too.