Pitru Shaapa - How is it caused?

Pitru dosh in Vedic astrology means forefather's curse. The deeds of your ancestors can cause you to suffer from the ancestral curse. This article discusses the causes, effects, and remedies of this astrological dosha.

The FIFTH HOUSE represents the house of progeny. The Ninth house is the house of Dharma. It represents the father and the paternal bliss (and curse). Being the 5th to 5th house, it is the house of grand children. Being the trine (trikona) house its lord associating with the quadrant (kendra) lord gives yoga. Being the 12th to 10th house it drains out 'Karma'. 9th to 9th house is 5th house, which is also house of grand father. Hence ascendant (lagna), 5th house and 9th house, is called Pitru Thread. When the Pitru thread is afflicted it shows father's curse or Pitru Shaapa. The curse of the forefathers appears usually when the native has not performed the last rites for his forefathers in his previous life failing to liberate them from the ghostly existence. Not following the family tradition may be also be the reason for such a curse. Those who have the Adhikâra to give Tarpana should do so ninety six times in a year as given below.

Various combinations are given in Brihat Parasara Hora Sastra. Many of these indicate the 5th house, 5th lord, the Sun . This scribe has seen many charts having Sun in 9th, where the natives have lost their father in their early years vindicating the dictum Karako Bhava Nashaya. When Rahu and Ketu are in any way connected with the 9th house or 5th house, either directly or through their Arudhas or through their badhaka houses, Pitru Shaapa is indicated. While natural malefics, Sun, Mars, Saturn become yogakaraka for certain ascendants, the nodes 'Rahu and Kethu' are always malefics to all ascendants and affect and afflict the tenanted house.

When 9th house or lord of 9th house from lagna (or Moon), the badhaka house to 9th or its lord (badhaka lord), are afflicted by Rahu or Ketu, Pitru Shaapa is indicated. Such affliction causes disruption of education, employment, marriage, progeny, etc. Pitru Shaapa is also generally seen in the charts of mentally and physically challenged children and/or their parent/s. 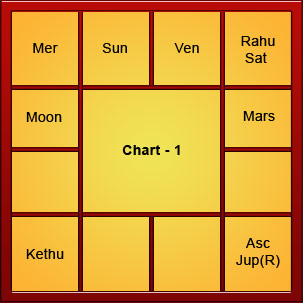 Chart 1 has Moon in Aquarius, its ninth house being Libra. Its Arudha, counting Venus from Libra is Taurus. 8th House from Taurus is Sagittarius with Ketu in the sign. Rahu and Saturn aspect Sagittarius. The native suffered from neurological problem from his teenage and had a mentally challenged child that passed away early. He has Pitru Shaapa.

Ancient Vedic techniques can decode challenges in relationships, profession & finances. Remedies, Vedic Mantras & Muhurthas can help alleviate the doshas, or the deficiencies found in your horoscope.

Sade Sati is the legendary seven & a half year of malefic Saturn transit affecting mental peace, family, finances and just about every ...

In these difficult times, there's a need to reconnect to our lost self for an inner peace. Is it destined for you?

Are you undergoing changes in life? Your operating dasa is the reason behind it. Dasa is the 'Change Agent' of life. Find out what more...

Rahu & Ketu are most mysterious planets as they work by changing the situations around you and give no time for learning. Their transi...

Are you destined to be successful professionally in a foreign land? Or is your success home bound? The Power Locations for your Career ...

The 'right time band’ or the Muhurtha for the initiation & commencement of an important process/event has the destiny-changing power....

Locational Astrology finds out the country, city, region & direction from your current location where you could find your true love or...

We sketch out different personalities of your probable love partners on varied Vedic parameters. This can help you decide between a num...

Assessment of your horoscope for strength of Mars & Mangal Dosha, along with Vedic remedies to bring down negative effects of Mangal Do...

Pitru Shaapa - How is it caused?

The cause & Pitru Shaapa and the remedial measures that help ward off the negative effects...

Does a magic point exist in a horoscope that brings untold wealth ? Yes ! Indu Lagna is the point that brings

Born to rule / rich like a king / rags to riches? A yoga is that cryptic combination that can change? Do you have

Jupiter, Saturn, Rahu & Ketu are the major planets that rule destiny. A clear analysis of their combined effect on

Spotlight on money matter. Where to invest? Income from job/business? Loan/investment. Answers for 2020-21...

Luck changes with marriage – Yes, but for good or bad ? How the destiny of spouse is a catalyst for your

How deep are your roots - Your Saturn Type decides

A well placed Saturn is highly rewarding. Whereas, a weak and malefic Saturn on the other hand can bring misfortune.