While the future forecast in the newspapers is also referred as the horoscope, what it actually means is a chart drawn showing the position of 7 planets and two reference points - Rahu and Ketu at the time of birth to calculate one’s life events and predict future. Using a Vedic horoscope, a learned astrologer can know more about a native’s past, present and future. For this, he makes assessment of planets, zodiac signs, and the nakshatra that is birth star and their placement in different houses, both at the time of birth as well as at present. To prepare a Vedic horoscope, one needs exact date, time and place of birth of the native. 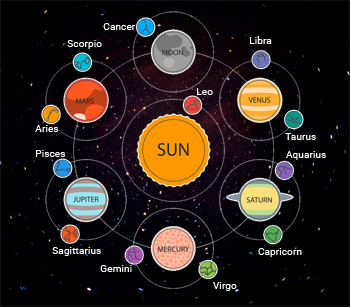 The three most important elements of a horoscope are signs, planets, and houses. If you trace Sun’s apparent path in the sky from earth, you would observe that it appears to form a circle in a year called ecliptic, which in fact is also the plane of earth’s orbital motion around Sun. This circle is called Zodiac. This 360-degree zodiac is divided into 12 equal parts of 30 degrees, each one is referred as a Rashi or a sign in astrology.


The starting point of the zodiac is the spring Vernal Equinox (intersection of Sun’s ecliptic with earth’s equator). This is where Aries begins from, followed by the rest of the signs in an anti-clockwise direction. Where Sun is placed at the time of birth is called the Sun Sign of the person and the sign where Moon is posited is called the Moon Sign. The rising sign or Ascendant is the sign or its degree that was rising on the Eastern horizon at the moment you took your first breath. The houses on the other hand are the 12 divisions of the sky as seen from any location on earth. The local horizon and the local meridian plane slice the celestial sphere into 4 equal parts. Where the horizon plane intersects the celestial sphere in the east is called the Ascendant or the first house. These quarters are further sliced to form 12 equal parts called houses, formed anti-clockwise from the Ascendant. As the earth rotates on its axis, local eastern horizon or the ascendant moves through one sign to another every two hours. And throughout the day, all the houses move through the whole zodiac circle causing planets to move through each house in 2 hours. Conversely, the time different planets occupy a sign is drastically different from one another. For instance Sun spends 30 days in a sign and Saturn stays in a sign for around 2.5 years.

Therefore, date, time, and place of birth are very important factors in determining the exact of position of planets in relevant houses and sign for a person. A Vedic horoscope or birth chart is constructed on the basis of the placement of planets and signs in houses. Here is what a regular Vedic birth chart looks like: 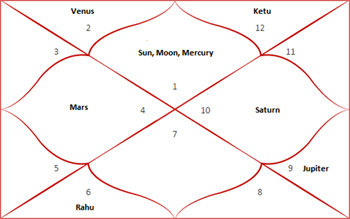 Each house signifies certain areas of life. Like the 4th house represents domestic life, property and happiness and 7th house stands for partnerships such as marriage and business. Correlation of planets with other planets (in form of conjunction, aspect or exchange of sign) affects the house where they are placed in.  For example, 7th house though is vacant in the above Vedic horoscope, yet it is under the malefic influence of Mars and Saturn due to their aspect. This could affect the marital life (7th house represents partner) of a person due to aggressiveness and ego hassles (Mars).