Who will be UP’s next CM?

This article attempts to predict the outcome of the Uttar Pradesh 2022 Assembly elections by analysing the planetary placements and combinations in Yogi Adityanath and Akhilesh Yadav’s horoscopes.

As the Assembly elections in Uttar Pradesh (UP) inch towards the last phase, the whole of India would await the results on 10th March since the state has the maximum representation in the Lok Sabha and significantly influences the political landscape of the country. In this context, the question occupying everyone these days is: Would Yogi Adityanath be the Chief Minister again, or would the alliance of Samajwadi Party (SP) – Rashtriya Lok Dal (RLD) result in the defeat of the Bharatiya Janata Party (BJP)?

In this article, we will try to predict the outcome from a purely astrological standpoint, based on a comparative analysis of the planetary placements and combinations in Yogi Adityanath and Akhilesh Yadav’s horoscopes. 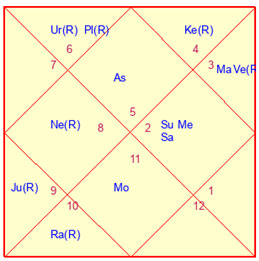 Yogi Adityanath has Leo ascendant, Aquarius Moon sign and, currently, the running dasha period is that of Ketu and the antar-dasha (sub-period) of Saturn. An analysis of his horoscope reveals the following facts that may be useful in predicting the outcome of the elections for him.

Venus and Mars are posited in the house of gains and income. Rahu is placed in the 6th house of enemies and service. With this position, Rahu will help him to overpower his opponents and emerge as the winner. In this context, there is a threat for his political opponents.

Ketu is in the 4th house of public relation.


Yogi Adityanath will be running through the Ketu main period and sub-period of Saturn from 13 January 2022 to February 2023.  Ketu is transiting in the 4th house of public relations and Saturn, the significator of politics, is travelling in the 6th house of competitions with other influential planets and Natal Rahu, which again is a good and strong combination to win against opponents. This is a very powerful combination to fulfil one’s desires; poised to bring favourable results.

Ketu in its main period will bring fortunate times for Yogi Adityanath that will help him in all the activities taking place in his life. With luck by his side, there may hardly be chances of any setback. This period will be full of opportunities, especially in terms of career, that can bring favourable outcomes if utilised wisely.

Saturn in Yogi Adityanath’s horoscope is well placed in the house of competitions and this placement will bless him with all the strength, fortune and wisdom to come out of the contest with flying colours.

The transit Sun is in the house of business and politics. By virtue of its natal chart placement and transit, the Sun is powerful enough to bless Yogi Adityanath with a favourable outcome in the elections. Sun, Jupiter, Saturn, and Mars play an important role for a successful career in politics.

The Ketu period may bring important and influential effects in the life of Yogi Adityanath and some major change or move in his life. Natal Saturn aspect on natal Ketu in his horoscope will prove beneficial for his political career and rise in politics. This period brings many challenges, but at the end he will overcome all adversities. This period may come up with a lot of opportunities for him.

Yogi Adityanath is undergoing the ‘Shani Sade Sati’ in the present period. The general perception is that Shani Sade Sati brings adverse results. However, if we look at the past, there are many examples wherein people who were under the impact of Sade Sati have seen extraordinary and overwhelming results. E.g. Donald Trump became the President of US during his Sade Sati, so did Morarji Desai and Narendra Modi, when they became the Prime Minister of India. Sade Sati is poised to bring expected results if the person leads a disciplined life with sincerity and dedication. 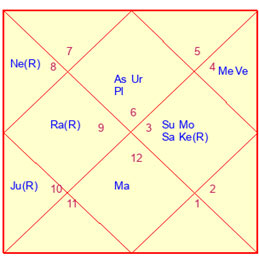 Akhilesh Yadav has a Virgo Ascendant, Gemini Moon sign and, currently, the running main period of Ketu and sub-period of Saturn. An analysis of his horoscope uncovers the following facts that may be useful in predicting the outcome of the elections for him.

Ketu is in the 4th house of public relation.


Akhilesh Yadav will be running through the Ketu main period and sub-period of Saturn from 19 February 2022 to 28 March 2023.  Ketu-Saturn conjunction is seen in the 10th house of career with Sun and Moon. If we look at transits, then Ketu transits in the 3rd house and Saturn in the 5th house.

Comparative analysis of the two horoscopes


With an understanding of the astrological charts and the comparison provided above, Yogi Adityanath seems to be better placed to win the 2022 Assembly election in UP as compared to Akhilesh Yadav.

Having said that, we cannot ignore the planetary configuration and dasa period in Akhilesh Yadav’s horoscope. The charts predict that he might lose marginally to Yogi Adityanath. But, when Jupiter enters the 7th house of Akhilesh Yadav’s chart on 13th April, there are chances that he might get an opportunity to explore the option of an alliance with some other contender that may help him to become the Chief Minister.