It is concluded from various sources that the Tamil Nadu elections will be maneuvered mainly in between two archrivals, DMK and the AIADMK. All the 38 districts in Tamil Nadu, comprising 234 assembly constituencies, will begin polls on April 6th. The BJP and AIADMK will be contesting 2021 Tamil Nadu elections as alliance allies. Meanwhile, the DMK has formed a coalition with the Congress and the Left parties. Counting of votes will take place on May 02. Here we will consider certain astrological facts about each candidate and his concerned party to bring out our tentative winner candidate, astrologically.

Edappadi K. Palaniswami and MK Stalin are the two contenders for the top post in Tamil Nadu. Let us analyze the Birth Chart of these two strong competitors to determine how they will fare in the ongoing Tamil Nadu Elections, and who will become the next CM of Tamil Nadu. 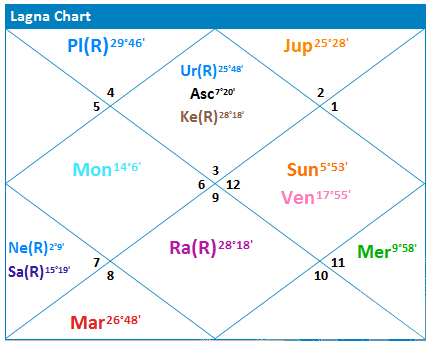 Edappadi K. Palaniswami’s planetary configuration indicates that his moon sign is Virgo and his Ascendant is Gemini. Jupiter is the 10th house lord placed in the 12thhouse [welfare scheme] with the placement of Sun and Venus in the 10th house [political power]. Sun being the lord of the 3rd house of efforts and Venus being the lord of the 5th house of ministership, indicates that he will work with sincerity and have the ability to take quick decision which is beneficial for his political career.

The 9th house [fortune] lord Saturn is in the 5th house of ministership and is strong and beneficial. The ascendant lord Mercury is posited in the 9th housed of luck but it is under the aspect of Mars, which is placed in Scorpio sign in the 6th house of health and debt or struggle. It revealed his strength in the year 2017 after the death of Jayalalitha. There was turbulence within the party, so he took the reins of his organization and consolidated it back to its strength with his efficiency and skill. This indicates that the 3rd house lord of efforts in the 10th house of power, makes the individual courageous.

In Navamsha, the placement of Jupiter with Sun in Leo sign in the 9th house is making a good Raj Yoga. But, the main period of Mercury which has started, is not making any good yoga but is placed strongly in the 9th house [fortune].

So as per Vedic astrology the planet [Mercury] cannot give its full auspicious or inauspicious results during its main or sub-period from 2021-2023. So, he is expected to get moderate success in these elections.

The transit of Sun in its exalted sign Aries in the 11th house of gains along with Venus lord of the 5th house of ministership is clearly visible. But, the transit of main period lord Mercury in the 12th house is expected to bring moderate success despite his decent performance during his current period.

(The Birth information has been derived from public sources)

MK Stalin’s planetary configuration indicates that his moon sign is Leo and Ascendant is Scorpio. Sun is the lord of the 10th house [political power] and is placed in the 4th house of stability, which indicates he owns good Raj Yoga with mutual opposition with 9th house lord [luck and fortune]. Moon tells us about his political legacy that he inherited from his father, Late Mr.M.Karunanidhi (who became the chief minister of the state 6 times which is a very good political achievement).

The 11thhouse [Gains] lord Mercury is in conjunction with 6th house lord Mars and it shows that he may have contradictory relations with his close family that should be avoided.

He is under the main period of Saturn and Sub period of Moon from the year 2020 until December 2021. Saturn is exalted in his birth chart, which is in mutual aspect with the two benefic planets Venus and Jupiter. The sub-period lord Moon is in the Pisces sign [Jupiter] in the Navamsha chart.